Backstage Update on Edge’s WWE Status – WWE Hall of Famer Edge is reportedly working on a contract that has limited dates.

Edge has not been seen since losing the “I Quit” match to Finn Balor at WWE Extreme Rules on October 8, which came after months of feuding with The Judgment Day, and his Toronto homecoming on the April 22 RAW, where he defeated Damian Priest. He was booted from the faction back in June. Now a new report from Fightful Select notes that Edge has only appeared periodically since splitting from the group because he’s working under a deal with limited dates.

WWE aired teaser vignettes for The Rated R Superstar back in the summer, and word from a WWE higher-up is that the promos aired as a way to “buy some weeks” on TV before Edge’s return, and to give them a little more time in order to build to some important matches throughout the rest of the year, which happened with the Balor and Priest matches.

It was reported in 2020 that Edge was signed to a three-year contract, good for 25 appearances and 5 matches per year. However, this was either incorrect or amended as Edge worked 10 matches in 2021, and has already competed in 9 matches this year.

There’s no word yet on when Edge’s contract is set to expire or how many appearances are left on the existing deal. If the terms originally reported in 2020 were correct, the deal could be up soon, if it wasn’t frozen due to injury.

After the win over Priest in Toronto, Edge went on to team with Rey Mysterio for a win over Priest and Balor at WWE Clash at The Castle on September 3. He defeated Dominik Mysterio on the September 12 RAW, but by DQ, then the Extreme Rules match happened on October 8. After that loss, there was an angle where Rhea Ripley hit WWE Hall of Famer Beth Phoenix with a Con-Chair-To while her husband was forced to watch. Edge tended to Phoenix to end the segment, and he has not been seen since.

Edge vs. Balor is rumored for the WWE Royal Rumble in January. 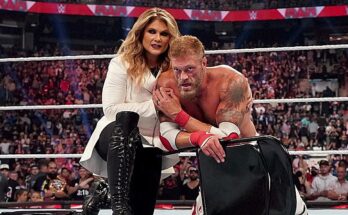