Mercedes Kaestner-Varnado, popularly known by her ring name Sasha Banks, is a well-known American wrestling superstar. Currently signed with the WWE, she has taken on some of the most talented wrestling professionals. She, along with Charlotte Flair also became the first women ever to win the Pro Wrestling Illustrated award for ‘Feud of the Year’. Born in Fairfield, California, in 1992, Sasha was passionate about wrestling from an early age. She was quite enthusiastic about ‘All Japan Women’s Pro-Wrestling’, which she grew up watching. Having begun her training in 2008 at Chaotic Wrestling, based in Woburn, Massachusetts, she earned her first victory in a tag team match in January 2011. In December, of the same year, she won her first title ‘The Chaotic Wrestling Women’s Championship, after defeating Alexxis Nevaeh. It was after signing a contract with WWE in August 2012, that she adopted her ring name Sasha Banks. Since then, she has won the ‘WWE Raw Women’s Championship’ 4 times, the ‘NXT Women’s Championship’ once, and ‘NXT Year-End Award for Match of the Year’ in 2015.

Sasha Banks was born as Mercedes Kaestner-Varnado on 26 January 1992, in Fairfield, California, in the United States. Not much is known about her family, but she has a disabled brother, who suffers from autism, for whom she and her family spent a lot of time travelling in order to find schools and hospitals. Banks later stated that she was like a second mother to her brother.

She later settled in Boston, Massachusetts, and she did her schooling online. She was a huge fan of Eddie Guerrero. She grew up watching ‘All Japan Women’s Pro-Wrestling’, a show, which she was very enthusiastic about. She had a strong desire to train from the early age of ten. However, her mother disliked wresting, and didn’t want her to take up wrestling as a career.

In the year 2008, she began her training at Chaotic Wrestling, an independent American wrestling promotion, based in Woburn in Massachusetts.

Her debut match, under the ring name Mercedes KV, took place on 1 October 2010. It was an intergender tag team match, where she teamed with Nikki Roxx against Alexxis Nevaeh and Danny E. Her debut singles match was on 22 October where she lost to her opponent Danny E.

She achieved her first victory on 7 January 2011 in a tag team match after she and Roxx defeated Alexxis and Mistress Belmont. Throughout the rest of the year, she competed in several singles matches. On 2 December, 2011, she defeated Alexxis in a ‘I Quit’ Match, to win the Chaotic Women’s Championship.

Throughout the next year, she successfully defended her title from many such as Luscious Latasha, Nikki Roxx, Alexxis Nevaeh, and Mistress Belmont. On 1 June 2012, she defeated Alexxis, Barbie and Mistress Belmont in a fatal four-way match to retain the championship following which she became the longest reigning Chaotic Wrestling Women’s Champion in history, beating the previous record of Alexxis which was 182 days.
After her reign of 260 days, the championship was declared vacant on August 18, as she signed a contract with the WWE.

With her new ring name Sasha Banks, she made her debut in WWE NXT. Her first match was against Paige, in which she lost.

Later, she started became a part of a storyline, receiving letters from a secret admirer who was revealed to be Audrey Marie. However, in an episode of NXT, she attacked Banks, due to her jealousy of her success. This was followed by a match between the two, in which Banks was defeated.

In February 2015, she defeated Charlotte Flair in a Fatal four-way match, winning the NXT Women’s Championship. A rematch was held next month, where Banks successfully retained her Championship by defeating Charlotte again. Throughout the year, she defended her title against several others such as Alexa Bliss, and Becky Lynch. She and Charlotte had a rematch again, in July, in which Banks emerged victorious again, retaining her title.

After a reign of 192 days, in August, she lost her Championship to Bayley. A rematch was held in September, where Bayley defeated Banks and successfully retained her title. It was Bank’s last match at the NXT.

Sasha Banks took part in the ‘Women’s Revolution’ which started from 2015, which was called for by Stephanie McMahon. She aligned herself with Naomi and Tamina Snuka, and formed Team B.A.D. Her first triple threat match was against Charlotte and Brie Bella, in which Banks suffered defeat. She faced many opponents later such as Brie Bella, Alicia Fox, and Becky Lynch.

Later, she was drafted to Raw brand as part of the 2016 WWE draft. In her first match, she faced Charlotte, whom she defeated, in order to win the WWE Women’s Championship for the first time. After a reign of 27 days, she lost the title back to Charlotte. The title was then renamed to Raw Women’s Championship.

In November 2016, Sasha Banks was a part of Raw’s women’s team for Survivor Series. Even though she was eliminated by Natalya, her team proceeded to win the match. During the same month, Banks defeated Charlotte in a Falls Count Anywhere match to win the Raw Women’s Championship once again.

A 30-minute Iron Man match between the two was scheduled for Roadblock: End of the Line on December 18, which resulted in a 2–2 draw, but Banks lost to Flair 3–2 in sudden death overtime, thus ending their long-time feud since it was stipulated that Banks could not invoke her rematch clause.

In 2019, on the March 26 episode of Raw, after weeks of animosity between the two, including Bayley betraying Banks during their matches, Banks and Bayley brawled in a backstage segment, which had to be separated by referees. Throughout the next few weeks, after Banks and Bayley continued to attack each other inside the ring and backstage, they were told to attend counsellor meetings to help maintain their friendship, which eventually led to them creating a tag team, known as “The Boss ‘N’ Hug Connection”.

After a short hiatus from the ring due to an undisclosed injury, Banks returned to WWE television in October, and took part in the first ever all women’s pay–per–view Evolution, where she teamed with Bayley and Natalya in a winning effort against The Riott Squad. In December, Banks and Bayley announced their intentions of becoming the first ever WWE Women’s Tag Team Champions, once the titles are established. On February 17, at the Elimination Chamber, Banks and Bayley won the inaugural WWE Women’s Tag Team Championship with lastly eliminating Mandy Rose and Sonya Deville in a tag team Elimination Chamber match. Banks and Bayley successfully defended their tag team titles at Fastlane against Nia Jax and Tamina after Bayley pinned Jax.

On the March 25 episode of WWE Raw it was announced that Banks and Bayley would defend their WWE Women’s Tag Team Championship at WrestleMania 35 in a Fatal 4-Way match against The IIconics, The Divas of Doom and Nia Jax and Tamina. The IIconics would go on to win the match, ending Bayley and Sasha’s reign at 49 days.

The following day, Banks canceled an appearance on the morning talk show Wendy at the last minute. Throughout the following week, speculation from dirt sheets emerged that she was looking to quit the company due to her longstanding frustrations with WWE. Banks held the impression that she and Bayley were going to have a long title reign to bring credibility to the WWE Women’s Tag Team Championship, with the two allegedly not being informed until the last minute that they would be dropping the titles at WrestleMania. Her talk show cancellation was reported to be due to a personal matter, but neither Banks nor WWE had confirmed the rumors of her attempted departure from the company.

After a four–month hiatus, Banks returned on the August 12 episode of Raw as a heel, where she attacked a kayfabe injured Natalya. Banks donned a new blue hair colour beneath a purple wig and went on to attack Becky Lynch with a steel chair, after the latter tried to make the save for Natalya. In September, Banks reunited with Bayley, when the latter also turned heel, and the two attacked both Lynch and Charlotte Flair. Upon her return, Banks reignited her feud with Lynch, which led to a match between the two at Clash of Champions for Lynch’s Raw Women’s Championship on September 15. The feud between the two women eventually led to the second-ever women’s hell in a cell match, which was took place on 6 October, at the Hell in a Cell pay-per-view, in which Lynch was once again victorious.

Banks was drafted to the SmackDown brand as part of the 2019 draft. Banks then went on another brief hiatus from TV due to injuring her tailbone, and was not cleared to compete.

Banks was a fan favorite to win the 2020 Women’s Royal Rumble match, however was absent from the event and several episodes of SmackDown preceding it, which led to speculation that she had sustained an injury.

After WrestleMania 36, Banks and Bayley would begin teasing a potential feud between the two, with the emphasis being put on the narrative that Banks is the reason for Bayley’s success and that Bayley is responsible for most of Banks’ losing efforts.

On July 19, at The Horror Show at Extreme Rules, Banks faced Asuka for the Raw Women’s Championship in a match that ended in controversy when Asuka inadvertently spat green mist in the referee’s face. Bayley then removed the referee’s shirt and counted the pin for Banks to unofficially win the title. On the July 27 episode of Raw, Banks eventually won the title for a record–setting fifth time, after Asuka left the ring to save her tag team partner Kairi Sane, who was attacked backstage by Bayley. With the win, Banks and Bayley became the first female tag team – and the fifth overall – in history to hold singles and tag team titles simultaneously.

Throughout August, Asuka and Banks continued their feud, which culminated in a title match at SummerSlam on August 23, where Banks dropped the Raw Women’s Championship back to Asuka. On August 30, at the Payback event, Banks and Bayley lost the Women’s Tag Team Championship to Nia Jax and Shayna Baszler.[223]

On the September 4 episode of SmackDown, after losing a rematch to Jax and Baszler, Bayley turned on Banks by brutally attacking her in the ring, thereby turning the latter face in the process and disbanding their team. After attacking and cutting promos on each other, the two faced off in a title match on the October 9 episode of SmackDown, which Banks won via disqualification after Bayley hit her with a steel chair, resulting in the latter retaining her title. The feud between the two eventually climaxed in a Hell in a Cell match at the eponymous pay-per-view, where Banks submitted Bayley to win the SmackDown Women’s Championship for the first time in her career. With the win, Banks became the third Women’s Grand Slam and fourth Triple Crown Champion.

In August 2016, Sasha Banks married Sarath Ton, a fellow wrestler, who works for WWE as a costume designer.

She is the first cousin of well-known rapper, Snoop Dogg; music producer, Daz Dillinger; and singers and songwriters, Brandy Norwood and Ray J. 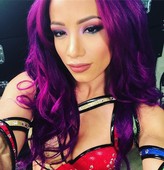 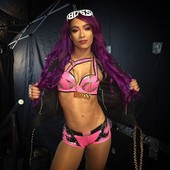 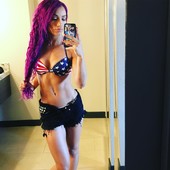