WWE has confirmed that Tyson Fury will be ringside at Clash at the Castle in Cardiff, Wales on Saturday. The news actually broke earlier this week, via Louis Dangoor of GiveMeSport.com.

The last time Fury appeared at a WWE event was on 10/31/19 at the Crown Jewel pay-per-view where he defeated Braun Strowman.

No word on what he will be doing on the show but it’s possible that he will be there to start the build for a match with Drew McIntyre. Their back-and-forth has died down in the last couple of months but both men have expressed in interviews that they would like to face each other in the ring.

You can see Fury’s announcement in the video below. 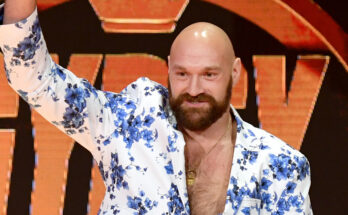