Below are the spoilers from tonight’s NXT tapings at Full Sail University. Click here for last night’s tapings.

* The tapings start with a video recap of last night’s NXT Women’s Title Steel Cage match between champion Shayna Baszler and Io Shirai, and Shirai’s heel turn on Candice LeRae after the match. Shirai comes out with a new entrance and an evil leather look. The crowd won’t let her speak for nearly 5 minutes. She says she doesn’t have any friends, and she doesn’t need any of us. She drops the mic

* Matt Riddle defeated Arturo Ruas. Ruas is the former Adrian Jaoude. Really fun shoot-style fight. Ruas with a takedown and Riddle fights from the ground with elbows. Riddle hits a huge knee and starts hammering away with punches, and the referee calls for the bell. After the match, a masked man runs in and attacks Riddle. He unmasks and it’s Killian Dain. Dain beats Riddle all over the ringside area and does a running senton to Riddle on the stage that sends Riddle through the stage

* Kushida defeated Apollo Crews. Hero’s welcome home for Apollo. Great match. Apollo with the delayed vertical suplex for a one count. Kushida fights back. Apollo with an overhead belly to belly. Kushida with a tornado DDT for 2. Apollo with the standing moonsault. Kushida hits a hurricanrana that Apollo turns into a pin for 2. Kushida and Apollo come off the top rope and Kushida has an arm bar when they land. Apollo tries for a one arm powerbomb, but Kushida turns it into the Hoverboard Lock for the win. They shake hands after the match

* NXT Champion Adam Cole out for a promo. Cole says he’s been out on the BayBay World Tour while his boys have been holding it down here at NXT. He says he’s going to be a fighting champion and he’s going to defend his belt tonight against this man — he pitches to the video of Johnny Gargano putting the championship on his friends in Cleveland. Adam introduces Twan Tucker. Cole says it’s just the two of them for this opportunity. Tucker says that’s too bad, because he didn’t come alone. Johnny Gargano comes out and he and Cole brawl all over the building and in the crowd, ending with Johnny diving off the stage onto Adam

* NXT Tag Team Champions The Street Profits retained over Oney Lorcan and Danny Burch. Good match. Fast-paced. Profits go for the Doomsday, but Oney fights out and they take control. Everything breaks down and we’re down to Oney and Montez Ford. Montez dives over Oney and wipes out Burch. Oney goes to dive but Angelo Dawkins nails him with a punch. Profits hit the spinebuster/frog splash combo to retain. After the match, Kyle O’Reilly and Bobby Fish come out and clap at the Profits from the stage

* Johnny Gargano and NXT Champion Adam Cole come brawling from the back. Gargano gets a superkick and locks on the GargaNo Escape until Cole taps. Gargano leaves holding up 3 fingers

* NXT Breakout Tournament Semifinal: Jordan Myles defeated Angel Garza. Garza is over as a star already. Garza rips Myles off the apron with a scary bump. Garza tears the pants off to a huge reaction. Stiff match. Myles fights back with kicks. Myles goes for a springboard but Garza dropkicks him out of the air for 2. Myles hits the Hero’s Grip for the win. Shane Thorne stormed out to commentary as the match ended as well

* Bianca Belair defeated Xia Li. Bianca dominates to start. Delayed vertical with squats attempt by Bianca, but Xia fights out. Bianca dodges a corner attack and hits the Belair Driver for the win

* NXT North American Champion The Velveteen Dream comes out for a promo. Velveteen says the day he steps down as champion is the day the experience dies and he’ll go straight to hell. Dream says Roderick Strong sold his soul to Satan himself to beat him in the six man tag. He says Roddy isn’t big enough to ride this ride and challenges anyone else to step up. Roddy interrupts. Says he can see it in his eyes and challenges him to a match at Takeover: Toronto. Pete Dunne interrupts to a giant reaction. Dunne lays out Strong and stares down Dream

* Io Shirai vs. Kacy Catanzaro ends in a disqualification. Io runs wild and has Kacy up for a Fairytale Ending when Candice LeRae runs out for the DQ. Candice brawls with Io and sends her running away

* Damian Priest defeated Keith Lee. Athletic big man stuff to start ending with the usual stand off after reversing moves. Priest takes control after kicking Lee’s knee on a charge in the corner. Priest with a rope walk into a crossbody. Lee starts firing up and gets a huge clothesline for 2. Priest hits a big suplex on Lee for a near fall. Lee with a huge pounce. Priest rolls out of the ring. Lee rolls him back in but Priest hits a knee and knocks Lee outside. Priest with a big flip dive, but Lee catches him and goes for a powerbomb, but Priest gets out and pushes him into the stairs. Lee gets angry and goes after Priest, but Priest grabs the referee. While Lee is distracted, Priest hits a kick and his version of Crossroads for the win

* Tyler Breeze defeated Jaxson Ryker. Ryker in control to start. Breeze fights back and gets a roll up for the shock win. The Forgotten Sons attack post match when Fandango comes out for the save to a huge reaction. They clear the ring and celebrate and pose to the audience

* NXT Women’s Champion Shayna Baszler comes out for a promo. She says Mia Yim delivered a message on commentary and she heard it. Says Mia attacked Jessamyn and Marina from behind and says this isn’t the streets, and that on the biggest stage, she’s gonna put her to sleep, because street rats like her don’t survive. Mia interrupts and talks trash. Mia asks if she’s scared, and says at Takeover she’s bringing a fight Shayna can’t train for. Shayna holds up the belt and they jawjack

* Matt Riddle out for a match, but he gets blindsided by Killian Dain at ringside. Dain hits a cannonball into Riddle against the steps and leaves him laying

* Kushida defeated Scott Parker. Looks like re-tape of Wednesday’s tapings, but more of a squash. Kushida wins with the Hoverboard Lock

* NXT General Manager William Regal comes out for a contract signing for the NXT Tag Team Titles match at Takeover: Toronto between champions The Street Profits and The Undisputed Era. Regal goes to introduce UE, but the Profits do the introductions, doing the New Age Outlaws schtick, introducing the “next tag team to get their ass kicked by the Street Profits: O’Reilly Auto Parts and Lawrence Fishburn Jr.” Undisputed out, Bobby Fish says that was funny, but he forgot to laugh. Kyle O’Reilly says he remembered to laugh, but didn’t because it wasn’t funny. Bobby says they’re funnier than them, and asks Kyle to tell him the joke he heard earlier. Kyle says the joke is “the Street Profits are NXT Tag Team Champions.” Everyone, including the Profits, laughs. The Profits run down Undisputed’s accomplishments, but then asks them what makes them think losing is an option for the Street Profits. They say there is only one option and that’s to win. The crowd chants win with them. Dawkins says in Toronto, the Street Profits are gonna beat that ass, and that is Undisputed. Everyone signs the contract and Regal makes the match official

* Shane Thorne defeated Joaquin Wilde. Good back and forth for most of the match. Wilde with a big powerbomb out of the corner for 2. Shane with a big uppercut. Wilde with a popup boot, the through the middle rope DDT and a flip dive. Shane rolls in at 9, then rolls back out. Shane tosses Wilde into the ring post, the steps, the ramp, and the apron, rolls him in the ring, and hits a running grounded knee for the win

* Pete Dunne defeated Roderick Strong. Grappling to start. Roddy with an enziguri and he goes to town with chops and stops in the corner. Pete with a huge clothesline and he hits the arm stomp. Pete bends the fingers and kicks the arm. Roddy with a torture rack backbreaker to regain control. Roddy with a dropkick for 2. Pete with a dropkick off the top and Pete runs wild on Roddy. Pete fights off a suplex and hits a big head kick. Pete goes for the moonsault, but Roddy cuts him off and drops him on the apron with a backbreaker, but only gets a 2. Roddy gets out of a Bitter End attempt and gets an Angle Slam, but Pete gets a DDT on the End of Heartache attempt. They trade chops. Roddy with an enziguri to the knee on the top rope. They go for a sunset flip and have a nasty landing. Roddy with a powerbomb for 2 and transitions to the Stronghold on the kickout. Pete gets a submission for the win. After the match, NXT North American Champion The Velveteen Dream sneaks in and faces off with Dunne. Strong yells at Dream that at Takeover, the title is his. Dunne grabs Dream’s fingers as he poses and snaps them, and lays him out with Bitter End to end the tapings 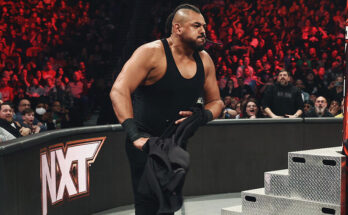