Ronda Rousey is a former American mixed martial artist and the first UFC Women’s Bantamweight Champion. She is also a judoka who became the first U.S. woman to earn an Olympic medal in Judo at the Summer Olympics in Beijing in 2008. Called a “slaughterhouse in a blouse” by Eminem, she was ranked No.1 among the 50 Most Dominant Athletes Alive in 2015, and is also the No. 1 pound-for-pound female MMA fighter in the world, according to MMARising. Born to a highly accomplished judoka, she inherited her mother’s passion for the martial arts. Her idyllic childhood was shattered when her doting father who was injured in a serious accident committed suicide unable to cope with the disabilities he suffered as a result. She struggled though her tragic childhood to emerge as a formidable judoka. She was very successful as a judoka and competed at the 2008 Olympic Games in Beijing, China. Soon she embarked on a career as a mixed martial artist, making her debut as an amateur in 2010. Over the ensuing years she established herself as one of the best ever in contemporary mixed martial arts and is regarded as the No. 1 Women’s MMA Fighter of all time. In May 2015, two magazines ranked Rousey as the most “dominant” active athlete. In September 2015, voters in an online ESPN poll selected Rousey as the Best Female Athlete Ever. Later that month, she claimed to be the UFC’s highest paid fighter, male or female. In 2015, she was the third most searched person on Google. In 2018, Rousey began a career in professional wrestling, signing a contract with WWE, and made her in-ring debut at WrestleMania 34.

Ronda Rousey was born in Riverside, California, on February 1, 1987. Her mother AnnMaria De Mars was an accomplished judoka who was the first U.S. citizen, male or female, to win a World Judo Championship. Her father Ron Rousey was a soldier.

Tragedy struck the family when her father who had been injured in a sledding accident was told that he would be a paraplegic. Unable to bear the burden of his disability, he committed suicide. Ronda was just eight years old at the time of his death and this incident affected her profoundly. Her mother later on remarried an aerospace engineer.

Ronda struggled in school and was having problems focusing on her studies. Her mother persuaded her to learn judo believing that it would provide a vent for the girl’s frustrations. Her mother became her first coach and made Ronda train really hard.

She was named to the United States Olympic team at age 15. So she dropped out of high school at 16 and later earned a G.E.D. At the age of 17 she qualified for the 2004 Olympic Games in Athens, becoming the youngest judoka in the entire Games.

In 2006, she claimed the gold at the Birmingham World Cup in Great Britain, and also defended her Pan American Judo Championship title. Later the same year, she went on to win the bronze medal at the Junior World Championships, becoming the first U.S. athlete ever to win two Junior World medals.

Her performance as a judoka touched new heights in 2007. Not only was she now ranked among the top three women in the world in the 70 kg category, she also grabbed the gold medal at the 2007 Pan American Games. The same year, she won the silver medal at the 2007 World Judo Championships in the middleweight division.

She participated in the 2008 Olympic Games in Beijing, China. There she lost the quarterfinal to Dutch Edith Bosch, but eventually ended up earning a Bronze medal after she qualified for another match through the repechage bracket. This victory ensured that she became the first American to win an Olympic medal in women’s judo since its inception as an Olympic sport in 1992.

She retired from judo after the 2008 Olympics. Initially she was unsure of what to do and spent some time working as a bartender. Eventually she joined the Glendale Fighting Club and made her amateur debut in mixed martial arts in August 2010 and emerged victorious by defeating Hayden Munoz by submission due to an armbar in 23 seconds.

She amassed several other amateur victories over the next several months and had a perfect 3-0 record in amateur MMA competition. She went on to make her professional mixed martial arts debut in March 2011 at King of the Cage: Turning Point where she defeated Ediane Gomes with an armbar in 25 seconds.

Ronda Rousey made her Strikeforce debut against Sarah D’Alelio in August 2011 in Las Vegas, Nevada. She easily defeated D’Alelio by technical submission due to an armbar early in the first round.

She then challenged Miesha Tate, the Strikeforce Women’s Bantamweight Champion at the time, for her title. Their match was much publicized as the professional rivalry between the two women was well-known.

The fight took place on 3 March, 2012, in Columbus, Ohio. Rousey defeated Tate by submission due to an armbar in the first round to become the new Strikeforce Women’s Bantamweight Champion.

Rousey defended her Strikeforce title against Sarah Kaufman at Strikeforce: Rousey vs. Kaufman in August 2012 in San Diego, California, and quickly submitted her with an armbar in just 54 seconds to retain the Strikeforce Women’s Bantamweight Championship.

She was challenged for her title by Alexis Davis in the co-main event at UFC 175 in July 2014. Rousey went on to win the fight via knockout just 16 seconds into the first round.

A match between Rousey and Cat Zingano was scheduled to take place at UFC 182 for the women’s bantamweight title. However, the fight was moved to February 28, 2015, at UFC 184. Rousey defeated Zingano with an armbar in 14 seconds, the shortest match in UFC championship history.

Rousey fought Bethe Correia on August 1, 2015, in Brazil, at UFC 190, winning the bout by knockout 34 seconds into the first round.[84] Rousey dedicated the match to “Rowdy” Roddy Piper, who died the day before, commenting that Piper was one of her inspirations and had endorsed her use of his nickname.

In her seventh title defense, Rousey faced Holly Holm in the main event at UFC 193 on November 15, 2015. Despite being a heavy betting favorite, Rousey was unable to get Holm to the ground and had no answer for Holm’s superior striking. Early in the second round, Holm knocked Rousey out with a high kick to the neck, ending Rousey’s three-year reign as champion. It was also her first loss. After the fight, Rousey and Holm were each awarded a Fight of the Night bonus of $50,000. She was also medically suspended by UFC on November 18, 2015, which included a no-contact suspension for 45-days, and no fights for 60-days, and would have to depend on CT scan results to have the suspension reduced. She was medically cleared on December 9, 2015.

After over a year away from the sport, Rousey returned to face current champion Amanda Nunes on December 30, 2016, in the main event at UFC 207. She lost the fight via TKO due to punches at just 48 seconds into the first round. Rousey had no answer to Nunes’ straight and overhand shots. Sports columnist Martin Rogers wrote, “Even with all that time to recuperate and prepare, Rousey did not learn an effective jab, the first and most basic tenet of boxing, one of MMA’s core disciplines.”

Rousey’s first wrestling match was at WrestleMania 34 in a mixed tag team match with Kurt Angle as her partner, against Stephanie McMahon and Triple H. Rousey gave her team the win by submitting McMahon.

On May 14, it was revealed that after being challenged by Raw Women’s Champion Nia Jax, the two would compete for the title at Money in the Bank. At the event, she would go on to win the match by disqualification via interference by Alexa Bliss, therefore not winning the title.

The next night on Raw, Rousey was suspended for 30 days after she attacked Bliss, Kurt Angle and multiple officials.

Rousey returned from her suspension on July 15 at Extreme Rules, attacking Bliss. The next night on Raw, Rousey’s suspension was extended another week by Kurt Angle, however, Angle said that if Rousey honored the suspension, she would receive a Raw Women’s Championship match against Bliss at SummerSlam. At the event on August 19, Rousey squashed Bliss to win the title, her first championship win in WWE. In a rematch between the two that took place a month later on September 16 at Hell in a Cell, Rousey once again submitted Bliss.

In 2019, on the March 4 episode of Raw, Rousey turned heel for the first time in her career when she cut a promo on fans and attacked both Charlotte Flair and Becky Lynch. At Fastlane, Lynch faced Flair in a match where if Lynch won, she would be inserted back into the Raw Women’s Championship match at WrestleMania 35. Rousey attacked Lynch during the match, giving Lynch the disqualification victory and thus the WrestleMania triple-threat match between Rousey, Flair and Lynch was made official. On March 25, WWE announced Rousey’s title defense against Lynch and Flair would be the main event of WrestleMania 35, making it the first women’s match to close WrestleMania. At the event, in what was changed to a Winner takes all for Rousey’s Raw and Flair’s SmackDown Women’s Championships, Lynch controversially pinned Rousey to win both titles. The commentary and production team commented that Rousey was in the ring saying her shoulders were not down for the full three-count and showed a replay of the ending pin-pointing this fact. Many fans and media were left wondering if this was a legitimate botched finish or if it was booked to end that way. Nonetheless, this gave Rousey her first loss in WWE and ended her championship reign at 232 days, making her the current longest-reigning Raw Women’s Champion.

In April, Rousey announced she was taking some time off to recover from injuries and make a family. In August, Rousey joined the Cast of Total Divas Season 9 which premiered on October 9.

She won the bronze medal in women’s 70 kg tournament in judo at the 2008 Summer Olympics.

She was the first UFC Women’s Bantamweight Champion, a title she holds since December 2012 to November 2015

In 2015, two magazines ranked Rousey as the most “dominant” active athlete and was recognized as the Best Female Athlete Ever by ESPN.

She is a fan of professional wrestling, Dragon Ball Z, and Pokémon. 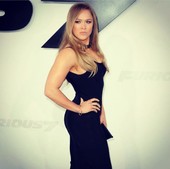 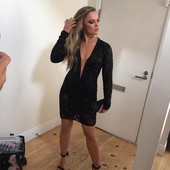 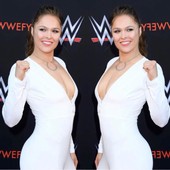