Bliss will appear on Monday’s RAW to explain why she attacked RAW Women’s Champion Bianca Belair this past week, dropping her onto the steel ring steps with two DDTs. The match ended in a DQ after Bliss snapped when she became distracted by two men in the crowd with Uncle Howdy masks on. Bray Wyatt’s logo also flashed on the screen, putting Bliss in some sort of trance as she attacked a referee, then Belair.

“In the wake of a shocking and brutal attack on the Raw Women’s Champion Bianca Belair, Alexa Bliss will explains her brutal actions from this past week on the red brand. Don’t miss Raw, this Monday at 8/7 C on USA,” WWE noted in their announcement.

WWE is also teasing that we will find out what’s next for WWE United States Champion Austin Theory on RAW. He retained over Seth Rollins this past Monday.

“After defeating Seth ‘Freakin’ Rollins in a controversial victory last week, see what awaits the reigning United States Champion in 2023! Don’t miss all the action of Raw, this Monday at 8/7 C on USA,” WWE wrote.

Below is a promo for Monday’s WWE RAW from the Legacy Arena in Birmingham, Alabama: 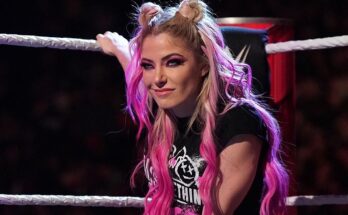