Lacey Evans Turns Heel On SmackDown – Tonight on WWE SmackDown, Lacey Evans was scheduled to team with Aliyah. Evans walked out for her entrance but she wasn’t happy with the fan response. She walked to the back and then back out a couple of times expecting a better response but she didn’t get what she wanted.

Evans took the mic and says before her opponents come out, she wants to say how disgusted she is over the response she just got. Fans boo. Evans asks if the fans know who she is, don’t they know what she’s been through. She reminds everyone how she’s poured her heart and soul out on TV, in hopes of helping the fans, but for what… those cheers and that reaction? Fans continue with “What?!” chants now. Evans says looking at a woman like her kills the people because of how weak they are. She goes on and says everyone knows all the struggles she’s been through and deep down in their souls, they know they can’t go through half of what she did and be the woman she is. Evans says the truth hurts, but when she comes out in the ring, she deserves a standing ovation, meaning everyone should be up on their feet. The boos continue.

Evans says she doesn’t know what it is, maybe the fans are too weighed down by pulled pork and brisket, that they can’t stand up. It makes her sick to see. Evans says the fans are disgusting. A “you suck!” chant starts up now. Evans says she’s an American hero, she’s sacrificed and put her life on the line for the likes of the fans, and for what, those cheers? Until she gets the respect she knows she deserves, as far as she’s concerned… every single one of the fans can go to hell. The boos get louder. Evans goes to exit the ring but Aliyah stops her and asks why. Evans drops her with the Woman’s Right. Evans exits the ring to more boos as we get a replay of the punch to Aliyah.

This was the heel turn that was initially planned several weeks ago after they aired vignettes hyping her return. Plans changed and she was moved to Raw and then back to SmackDown. 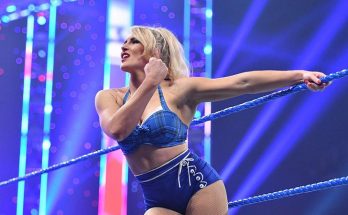