Killer Kross Files To Trademark Ring Name – The former WWE star and current wrestling free agent filed to trademark his ring name, Killer Kross, five days ago on April 21; as of April 25, the trademark was approved and is now waiting examination from an attorney.

Killer Kross has filed the trademark, under the party Oscorp & Kross, Inc. (a reference to both Kross and a fictional company in the Marvel comic universe), for the use of entertainment services in MMA, pro wrestling, and other fields. The trademark filing also includes documents featuring the application, drawing, and specimen.

Killer Kross resumed using his most famous ring name, which he had used for the bulk of his career, following his release from WWE in November of 2021. Kross returned to the ring in February following the expiration of his noncompete clause, he has since wrestled for promotions such as Warrior Wrestling, MLW, and NEW Wrestling. His most notable match took place at WrestleMania weekend, where he lost to Minoru Suzuki at New Japan Strong’s Lone Star Shootout event.

In addition to the trademark news, Killer Kross recently made news by marrying his long-time partner, former WWE NXT star Scarlett Bordeaux. The couple tied the knot on a glacier in Alaska on April 20, with Kross posting photos and videos of the nuptials on social media. 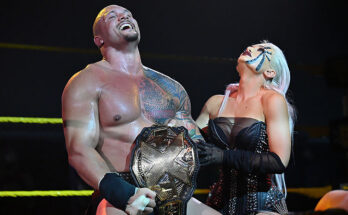