Brock Lesnar vs. WWE Universal Champion Roman Reigns has been announced for the 2021 Crown Jewel event in the Kingdom of Saudi Arabia.

WWE just announced Lesnar vs. Reigns for their return to Crown Jewel on Thursday, October 21. Paul Heyman is advertised to be in Reigns’ corner.

WWE has also announced that Crown Jewel will air at 1pm ET on October 21. The event will air live via Peacock and the WWE Network. 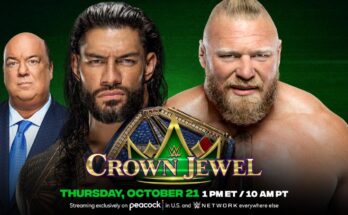