Last night’s show saw Riddle and Lucha House Party defeat MVP and RAW Tag Team Champions Cedric Alexander and Shelton Benjamin of The Hurt Business in six-man action. MVP appeared on RAW Talk after the show and was using crutches to get around.

He also posted a photo of the crutches to his Instagram account, joking in the caption, “I’m uh po’ some Robitussin on it…”

MVP also indicated that he was using some spirits to ease the pain as he posted a photo of a post-show drink and wrote, “Bourbon works…”

The fan asked, “Needing the crutches from carrying raw for a year?”

He responded with a laughing emoji in the comments section.

It was speculated on Wrestling Observer Radio that the leader of The Hurt Business may have blown his knee out during the six-man match. Dave Meltzer noted that the injury may have came after MVP took a bump off the apron and landed on his feet, then returned to the ring, but that was not confirmed. He was seen limping in the ring after the apparent knee injury, which came late in the match, and was then helped to the back when the camera was off them. When the camera was put back on the group, MVP was seen trying to walk on his own and tough it out.

There’s no word yet on the severity of the injury, but we will keep you updated. Below is a photo of MVP with the crutches on RAW Talk: 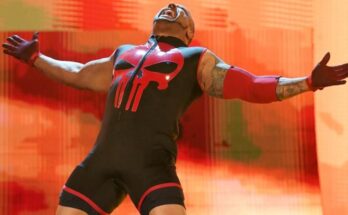