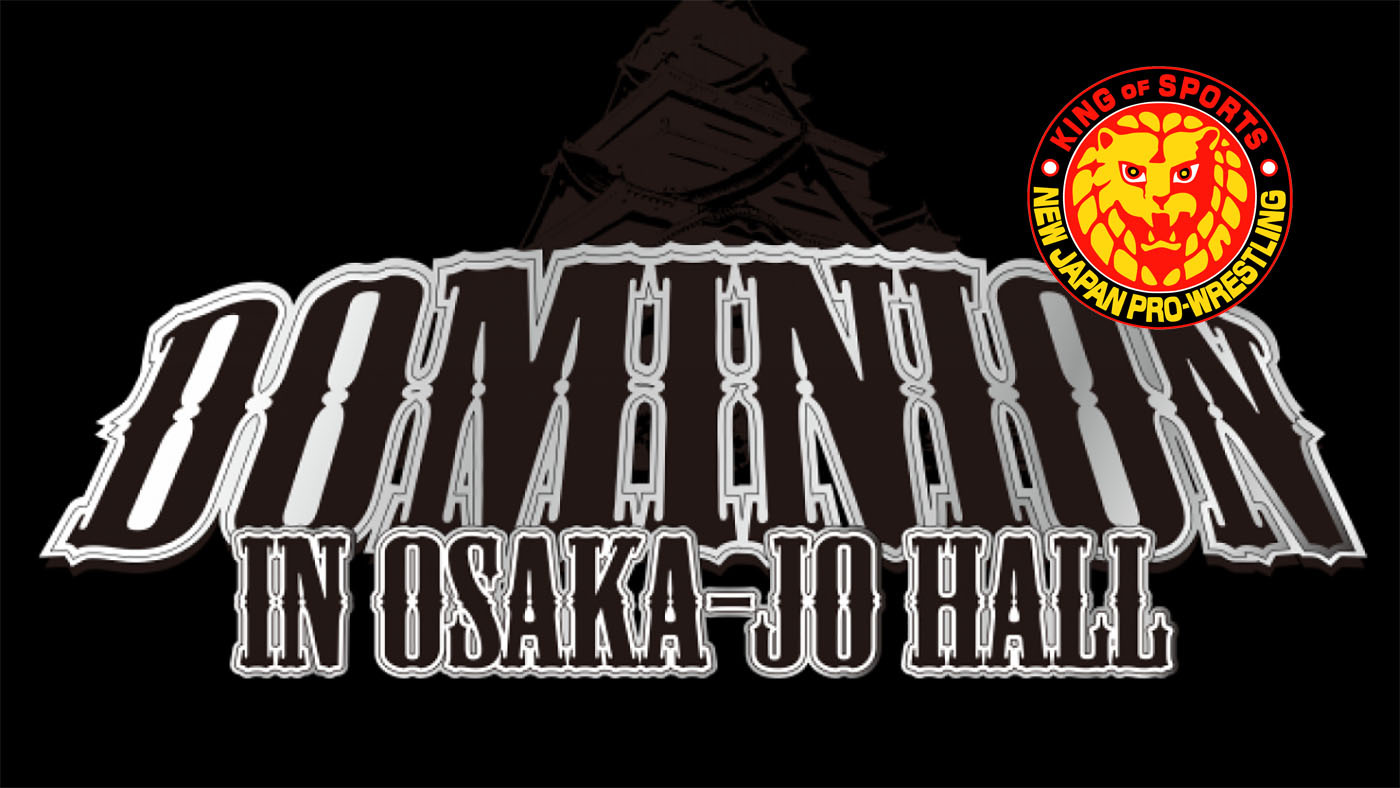 Here are the results from last night’s NJPW Dominion.

The event had reduced attendance capacity to comply with social distancing regulations. Also, the live audience was instructed not to cheer loudly to reduce exhalation of potentially contagious aerosols.

Yuji Nagata, Satoshi Kojima & Ryusuke Taguchi def. Togi Makabe, Tomoaki Honma & Gabriel Kidd (9:25)
The audience only reacting by applause is still somewhat jarring, but the crowd is making the most of it. There was an extended bit of Kojima and Honma trading Machine Gun chops in which the crowd clapped in time with every single chop. Their hands are going to be sore by the end of the night. These matches do get repetitive, but when a young lion’s in there it’s always satisfying to see the process of their development.
Finish: Yuji Nagata over Gabriel Kidd by submission (Nagata Lock II)

Los Ingobernables de Japon (Hiromu Takahashi, BUSHI & SANADA) def. Tomohiro Ishii, Toru Yano & Yota Tsuji (10:15)
The story of this match was more how Los Ingobernables de Japon were processing EVIL’s betrayal yesterday. None of them looked particularly happy to be there. and SANADA and BUSHI weren’t carrying the NEVER Openweight 6-Man Tag Team Championships that they were holding with EVIL. Hiromu Takahashi’s hair was frayed like he’d been up all night and his wrist tape had “Why?” written on it over and over again.
Finish: Hiromu Takahashi over Yota Tsuji by submission (Boston crab)

Suzuki-gun (El Desperado, Yoshinobu Kanemaru & DOUKI) def. Master Wato, Hiroyoshi Tenzan & Yuya Uemura
Master Wato’s strikes are a little loose, but he wrestles with a good energy about him and he’s very young so I don’t view it as particularly problematic. He got over as a young lion for being an underdog who you could really feel for, so his lack of dominance can be forgiven, but Hiroyoshi Tenzan being the one to draw sympathy by being beaten up by all three members of Suzuki-gun seemed misplaced.
Finish: El Desperado over Yuya Uemura by pinfall (Pinche Loco)

Bullet Club (Taiji Ishimori & Yujiro Takahashi) def. CHAOS (Kazuchika Okada & Hirooki Goto)
Okada threw his big coat at Yujiro as he entered, incensed by Yujiro’s intereference in the New Japan Cup yesterday, and he kept trying to go after Yujiro. This isn’t the first time Yujiro interfered to Okada’s detriment in a big match, so Okada’s bone to pick was evident. After a while, Gedo came out and hit Okada in the back with a spanner while Goto was the legal man, and this gave Ishimori and Yujiro the opportunity to team up on Goto for the victory.
Finish: Yujiro Takahashi over Hirooki Goto by pinfall (Pimp Juice)

After the match, Okada was able to shake Gedo off to attack Yujiro some more, but Yujiro planted him with a Pimp Juice of his own. As he said in an interview yesterday, he wasn’t on Okada’s level, but he could pull Okada down to his own level.

NEVER Openweight Championship Match: Shingo Takagi (c) def. SHO
We’ve seen a lot of this match over the last month, with SHO defeating Shingo for the first time in the first round of the New Japan Cup, and them coming to blows ever since. SHO has continued to carry himself more and more like Shingo’s equal despite Shingo’s advantage in experience and size. It goes without saying that these two hit each other hard and threw each other hard, but they brought it into a new gear in this match, just potatoing each other in a way that pleased my hindbrain very much. SHO looked to have Shingo on the ropes and lifted him for the Shock Arrow, but Shingo sprawled and lifted SHO for a Made in Japan that gave him a near fall. He hit a Pumping Bomber, but SHO kicked out immediately, even before the one count. SHO attacked with a cross-arm piledriver for a near fall. From that point, he kept going for a cross armbreaker, but Shingo used his strength to keep getting out of it. SHO finally hit a straight punch, followed by a GTW and the Last of the Dragon for the win. Shingo Takagi defends the NEVER Openweight Championship.

As Shingo celebrated on the ramp, El Desperado came from behind the curtain and punched him in the face, then hit Shingo with his own belt. He yelled that Shingo would be accepting this challenge no matter what.

IWGP Tag Team Championship Match: Dangerous Tekkers (Taichi & Zack Sabre Jr.) def. Golden Ace (Hiroshi Tanahashi & Kota Ibushi) (c)
Even Zack Sabre Jr., who is considered a relatively noble wrestler by Suzuki-gun’s standards, couldn’t help but stoop down to Taichi’s level. The two of them took turns beating down Tanahashi while keeping him separate from Ibushi. Zack bit off more than he could chew and Tanahashi got out of his abdominal stretch and whipped him with a reverse Dragon screw. He reached Ibushi for the hot tag, who unleashed hot fire on his enemies. Ibushi was on the verge of winning, but Zack came in and put him in a guillotine, which he was nearly disqualified for. Ibushi landed a LOUD high kick that dropped Taichi to the mat, then tagged in Tanahashi as Taichi tagged in Zack. Tanahashi hit a sling blade for a near fall when Taichi came in to break up the pin. Tanahashi hit another sling blade and a high fly flow, but Zack got his knees up. With Taichi holding Tanahashi in place, Zack hit repeated dragonscrews on both of Tanahashi’s legs. Taichi hit a high kick on Tanahashi as Zack planted him with the Zack driver for the victory. Dangerous Tekkers (Taichi & Zack Sabre Jr.) are the new IWGP Tag Team Champions.

IWGP Heavyweight & IWGP Intercontinental Championships Match: EVIL def. Tetsuya Naito (c)
EVIL entered with new music and a new look about him, like a cross between a Roman gladiator and a dominatrix. Every member of Bullet Club in the country accompanied him to the ring, but the referee refused to start the match with them present. EVIL rolled in and out of the ring as the match began, but the angered Naito ran straight after him. EVIL took the early edge, and with Naito laying, EVIL took Milano Collection AT’s EVIL toy scythe and broke it in half, then threw it at him. Incensed, Milano jumped the barricade and tried to fight EVIL, but EVIL whipped him into the guardrail, knocking him out of commission. EVIL continued to batter Naito, destroying his knee to nullify his speed advantage. He had pulled out a table earlier in the match and he lifted Naito and gave him a sickening knee drop straight through the table on the outside, which also gave Naito a big cut on his back. He grinned (evilly, as you might imagine) at Naito, then floored him with a running lariat and Darkness Falls for a two-count. Naito took back the momentum with a turning rope-assisted DDT and the Gloria for a near fall of his own. He lifted EVIL to the top rope to hit a super hurricanrana, then a running DDT for yet another count of two. Naito went for the Destino again, but EVIL blocked it and pushed him into the referee, giving Bullet Club the opportunity to interfere. Hiromu Takahashi ran out and took on Jado and Taiji Ishimori by himself. Although they were apprehended, EVIL had grabbed a steel chair amidst the chaos and slammed it right over Naito’s head, popping the seat off. He looked to capitalize, but Naito blocked the EVIL finish and went for the Destino only for EVIL to hit a mule kick while pushing the referee down. BUSHI came out and lifted Naito to his feet, only to attack him. EVIL stomped Naito in the groin and hit the EVIL for the three count. EVIL is the new IWGP Heavyweight and IWGP Intercontinental Champion.

BUSHI, who had helped EVIL win the match, took his mask off to reveal he wasn’t BUSHI, but Dick Togo, a freelance wrestler who has been in NJPW before. Hiromu Takahashi came out and, to avenge Naito’s loss, wanted to challenge EVIL for his newly won championships. If not both, either one would be fine, he noted. EVIL brushed him off and left Hiromu going ballistic in the ring.