NXT North American Champion Keith Lee and Mia Yim appeared together on WWE’s The Bump on Sunday. Both competitors discussed their respective matches at NXT TakeOver: In Your House. Here are some highlights.

Keith Lee on his health heading into Takeover:

Lee: “Well, first, let’s address the corneal scratch, and it’s exactly as you say, a scratch, which is not enough to put me down. As far as my hand, I’m at a point now where I can drink my tea safely, and that is enough for me. If I can pick up a teacup, then I can pick up Johnny Gargano, so we’re in a very good place.”

On separating his personal feelings from the challenge of wrestling Johnny Gargano:

Lee: “I think that they go hand in hand, to be honest with you, because new challenges, most people know they excite me and I enjoy a challenge, I enjoy competition. The problem is making it personal and deciding to kind of dishonor the ideal of a competitive match makes me a little more upset about it, but I have come to myself and taken to a little bit of tea to keep myself in a good place. The focal point will be to make a point out of Mr. Gargano today, so that’s how I feel mentally and my vision right now.”

Mia Yim on her reaction to Candice LeRae’s villainous turn:

On the first time she and Keith appeared on-screen together as a couple:

Yim: “Well, I didn’t know Keith was coming out at all, so I was just trying to get to the back to let everyone know that I’m okay, I can breathe, my face is still intact. So then I turned to leave, like, go through the curtain, he pops out and just completely surprised me, and it was like the look of worry and fear on his face, this might sound crazy, but I thought it was the cutest thing.”

Lee: “We don’t do cute around here, we are extremely manly and bold and things of that sort.”

On her six-woman tag team match at TakeOver:

Yim: “What’s interesting about this match is that we’re all intertwined with each other. The case of the matter is all three of them has, both Raquel, Dakota and Candice, the three of them have been, like little chihuahuas, like, just can’t shut up. So, you know, sometimes, they need a little…so that’s the plan for tonight. But I don’t want to be greedy, I know Shotzi and Tegan want a piece too, so they can get their pound of flesh, but not before I get my five pounds of flesh.” 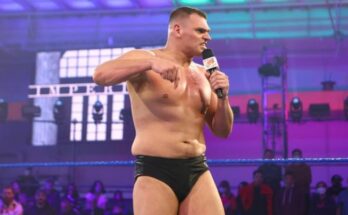