We are live from the WWE Performance Center in Orlando, Florida. WWE Hall of Famer Shawn Michaels and Vic Joseph will be calling the action.

Dream has a very football-esque look for this match. Ricochet and Gargano get things going. Crowd with a “Johnny Halftime!” and “NXT!” chant. Gargano with a headlock right out of the gate and runs over Ricochet, but he does a kip-up. Gargano with a hurricanrana, Ricochet lands on his feet, wraps his feet around Gargano’s neck, flips him, goes right into a dropkick. Ricochet charges into the corner, but gets dropped by Ricochet. Cole tags in with a wristlock, Ricochet able to work his way back to his corner and tags in Black.

Black sent into the corner, kicks Cole away, flips over him, flurry of knee and elbow strikes, cover, two-count. You can see these guys have upped the speed a bit in this one. Ciampa is tagged in, gets a kick to the face, Dream is tagged in, springboard shoulder block. Ciampa tries for an irish whip and Dream puts on the breaks and gets into a 3-point stance. Ciampa with a quick knee strike on Dream as he charges in. Ciampa sends him into the corner, Dream with an elbow and then a double ax handle off the second rope. Ciampa to the outside, Black with a fake to the outside. Ricochet does his fake, and Dream does his own feint and slides back into the ring. Crowd enjoyed that spot as the three head outside the ring and brawl.

Things calm down a bit as Ciampa and Dream get back into the ring. Ciampa with a reverse chinlock, jawbreaker by Dream, slap to the face. Gargano tags in and hits a slingshot spear, cover, one-count. Cole tags in and goes to work on Dream, looks for a second rope attack and Dream nails him with a superkick. Dream crawls back to his corner and tags in Ricochet. He goes to work on all three of his opponents. Ends up hitting a crazy cutter/DDT combo on Ciampa/Gargano. Springboard elbow and standing moonsault on Cole, cover, two.

Cole recover, hits an enziguri, tags in Gargano. Ricochet is able to tag in Black, runs over Gargano a couple times, low sweep kick, followed up by a drop kick. Black with a second rope moonsault on both Ciampa and Gargano, then hits golden moonsault out to the floor. Gargano takes down Black with a suicide dive to the floor. Dream flies out and takes out some people. Ricochet then takes to the air and hits a flip over the top rope and Gargano tried to hit a slingshot spear.

Black takes down Gargano, german suplex with the bridge, two count. Dream tags in, Ciampa comes in to help Gargano as they swing away on their opponent. Now it’s Black and Ciampa, Black gets sent to the apron, Cole with a superkick, and everybody starts taking out everybody! Dream finishes with his twisting DDT on Gargano, pin, two. Crowd with a dueling “This is awesome!” chant. Ricochet leaps off the top rope, but Gargano nails him with a big lariat. Tags in Cole, Ricochet tries to fight off both Cole and Gargano. Superkick on Cole, Ricochet hits a standing moonsault on Gargano, then tries for a second rope moonsault, Cole catches him with a superkick in midair! Cover, two-count.

Cole and Ricochet in the ring now, last shot misses, Ricochet rolls him up for a two-count. All six men in the ring just swinging away on each other. They pause for a moment and then really swing away on each other! Crowd pops big for this. Reverse rana on Ricochet, Black misses black misses, but nails a big knee on Gargano. Dream suplexes himself and Ciampa out of the ring. Cole is sitting on the turnbuckle and sees Ricochet dazed. He leaps and ends up hitting a panama sunrise! Pin, two! Crowd thought that was it.

Ricochet is in the ring by himself with all the of his opponents in the ring. Triple kick to the head, cover, and Black makes the save at the last second. Dream is able to tag in, but it’s not him against all three opponents. He swings away wildly at all three guys, double superkick stops that. Ciampa with fairy tale ending, nope, Ciampa takes like three superkicks to the face. Gargano nearly hits him, Black mass on Ciampa. Dream driver hits on Ciampa. Black mass hits on cole, dream driver on Cole, Ricoeht with a 450 springboard splash, purple rainmaker hits. Dream with cover on Cole, 1-2-3! 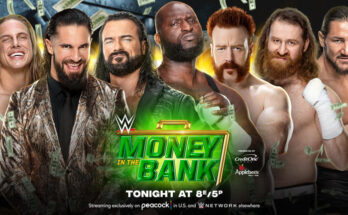