– As noted, Heath Slater worked a WWE Superstars match against Apollo Crews on Monday before RAW but was not in the battle royal during RAW and was not at ringside for the other Social Outcasts, despite being featured on a graphic for the match. Bo Dallas and Curtis Axel teamed up at tonight’s SmackDown tapings in Kansas City but Slater was nowhere to be seen. Slater has been active on Twitter since last night but has not commented on where he was. He did re-tweet this post from a fan:

Raw without @HeathSlaterOMRB isn’t the same :'( I miss watch u in tv. pic.twitter.com/26Wtwu0b11

– Take a look at these gorgeous new pics of Barbie Blank, known as former WWE Star Kelly Kelly. This is just a preview, we have 24 new photos at this link: womens-wrestling.com/photos-kelly-kelly.html 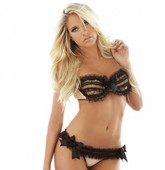