WWE SmackDown Results (11/11) Indianapolis, IN – We are live from the Gainbridge Fieldhouse in Indianapolis, Indiana, as Undisputed WWE Tag Team Champions, The Usos, make their way to the ring to start the show. The New Day are next.

We see the rest of The Bloodline, minus Sami Zayn, watching backstage.

Jimmy tags in and he punches Kofi in the midsection. Jimmy with a rear chin lock. Kofi with a missile drop kick and both men are down. Jey tags in and Kofi sends Jimmy over the top rope when Jimmy tries to stop the tag. Jey grabs Kofi but Kofi kicks Jey away. Jimmy pulls Woods off the apron to prevent a tag. Jey with a belly-to-back into a neck breaker for a near fall.

Kofi with a kick to Jimmy and he hits the Boom Drop. Kofi sets for Trouble in Paradise but misses. Jey tags in and Jimmy is sent to the floor. Jey with a thrust kick and uppercut. Kofi with an SOS for a near fall. Jey has a kick blocked but he hits an enzuigiri. Jey sends Kofi over the top rope but Woods makes the tag. Woods with a head butt. Woods misses a tornado DDT and a jumping side kick. Jey with a kick and Jimmy tags in. They hit a double super kick on Woods, then Kofi, and Woods again. Jey tags in and they both go up top for a double splash but Woods kicks out.

We see Solo, Paul, and Roman in the back and Cole mentions since the Usos do not have a title defense over the weekend, they will pass the New Day on Raw.

We see the Usos return to the locker room. They ask Roman what did he think about the match. Roman gets up from his seat and he says it feels good. This is what being the greatest of all time feels like. Now that you have that done, it is time for him to handle some things. He wants Jimmy and Jey by his side. He wants to do it the right way. He wants to handle it in the ring. Roman hugs Jimmy and Jey.

– The World Cup will take place over the next three weeks and the winner will get a title match against Gunther.

Shinsuke Nakamura vs. Santos Escobar in a First Round Match in the Smackdown World Cup

Escobar says messing with Legado del Fantasma is dangerous. He is not only representing Mexico, he will show Nakamura what it takes if you mess with Legado.

After the match, Escobar stands tall as the music hits and we go to replays. Legado del Fantasma stands together in the middle of the ring now while Nakamura is down.

– Cole wishes a Happy Veteran’s Day to all of our veterans in the United States. We get a video tribute for Veteran’s Day now. The crowd cheers and chants “USA!” now as we see at least a veteran or two in the crowd.

– We go back to the ring for the Six-Pack Challenge to determine who will challenge SmackDown Women’s Champion Ronda Rousey at Survivor Series. Out first comes Liv Morgan. She hits the ring to pose in the corner as we go back to commercial.

Megan Morant is in the back with LA Knight. He says the only thing that needs to be acknowledged is that I was not in the Smackdown World Cup. It is all for naught because he cannot stop this gravy train.

MONITOR behind Knight shows Wyatt imagery and LA says this is his time.

Bray Wyatt shows up and he introduces himself to Knight. He says he sees the anger and rage inside Knight. Bray says people have told him that his rage would make a monster out of him. He says he has been pretending that he was not proud of the things he does. He says he does not know if that is true any more. Bray says he knows what it takes to get respect. Bray asks Knight how far are you willing to go. Knight says it is none of Bray’s business. He tells Bray to go back to his room and play with his puppets. He says it is his game. Bray with a big headbutt to Knight.

Sonya with a round kick to Liv and Shotzi with a neck breaker to Sonya. Lacey with a clothesline to Shotzi. Li kicks Lacey. Raquel with a kick and a Tejana Bomb but Sonya pulls Raquel out of the ring. Sonya is pulled out of the ring by Raquel and Raquel kicks Sonya. Raquel looks under the ring and gets a table. Raquel gets on the ring steps and sets for a power bomb trough the table but Liv with a cross body to Raquel on the steps and they all go down.

We are back and Shotzi celebrates with her tank and Emma shows up and tells Shotzi that she can take on Ronda. Emma says they need to talk and she asks if she saw Madcap.

Shayna Baszler shows up and tells Shotzi to enjoy her time in the limelight. Ronda Rousey will give her the beating of a lifetime and she will feel more pain than she ever felt. Maybe she gets a broken arm or a shattered ankle. Shotzi says Ronda has never been in the ring with anyone like her. She will endure whatever Ronda has to dish out. Shayna tells Shotzi to turn around to say it to Ronda. Shayna chokes out Shotzi.

Gunther, Kaiser, and Vinci show up and wants to know what Ricochet meant ‘what was yours’. He tells Ricochet he hopes he wins because he will love to beat him again.

– We take a look at Omos and Strowman from Saturday. Stowman qill be in action next, after a commercial.

Braun Strowman vs. Jinder Mahal in a First Round Smackdown World Cup Match

Jinder Mahal says the greatest WWE Champion is back and he begins his ascent to his rightful spot. He will win tonight and then become the Intercontinental Champion. He says there is no man…

Mahal attacks Braun from behind and kicks him in the corner. Mahal chokes Strowman and the referee starts the match.

Braun pushes Mahal back and then Mahal with a drop kick to the knee. Mahal with a Harley Race knee for a near fall. Braun sends Mahal to the mat. Mahal charges at Strowman and bounces off him. Strowman with a shoulder and Mahal goes to the floor. Braun goes to the floor and it is Braun Lap time. Braun with a shoulder tackle to Mahal. Braun with a splash into the corner followed by a power bomb for the three count.

Before the match can start, Sarah Logan comes out and Erik and Ivar go after Top Dolla and Ashante Thee Adonis as well as Wilde and Cruz.

Zelina goes into the crowd because she does not want to get hurt. Erik sends Cruz into the time keeper’s area. Ivar with a cross body to Wilde against the ringside barrier. Erik with a knee to Adonis and Ivar with a frog splash. Dolla with punches but Erik and Ivar are too much with forearms. They get Dolla up for a double choke slam. Sarah brings B-Fab into the ring and B-Fab slaps Logan. Logan with a pop up head butt to B-Fab.

– We take a look back at Logan Paul and Roman Reigns at Crown Jewel.

Roman Reigns and The Bloodline (minus Samy Zain) make their way to the ring as we go to commercial.

Back from the break and fans chant “Ucey!” as Reigns takes the mic and calls on Indianapolis to acknowledge him. Heyman says he and The Tribal Chief were on the private jet flying onto this hell-hole… fans interrupt with boos… Heyman says that’s not very Ucey of Indianapolis and they boo some more. Heyman says all the great sports rivalries play out live on FOX – the USA vs. UK in soccer this weekend, the NFL’s Dallas Cowboys vs. Green Bay Packers this weekend, and tonight we saw The Usos vs. The New Day. Heyman laughs and says he’s lying through his teeth, he can’t even keep a straight face because The Usos vs. The New Day is not a great sports rivalry as The New Day can’t compare to The Usos.

Fans boo as Heyman goes on praising The Usos. Reigns says it’s not easy being his cousin as everyone has always acknowledged him for his greatness throughout their whole lives. He never thought this moment would come but… Reigns calls The Usos’ by their names but the music interrupts and out comes Butch and Ridge Holland of The Brawling Brutes. Holland says they are sick of The Bloodline using the numbers game each week, but tonight is Fight Night and they’ve brought back-up. The music hits and out comes Sheamus to a big pop.

Sheamus speaks from the stage and it sounds like he says The Bloodline (or The Brutes?) are legends, but tonight is the start of the end of The Bloodline. Reigns laughs, as do The Usos. Sheamus had some audio issues and Reigns says he can’t even get the mic to work. Sheamus says he has no problem saying this to Reigns’ face. The Brawling Brutes march to the ring now and they enter. A big brawl breaks out now with Reigns also getting involved. The Bloodline stomps away until the music interrupts and out comes Drew McIntyre to a pop.

Jimmy Uso meets Drew on the entrance-way but Drew levels him. Drew then headbutts Jey as he enters the ring. Solo faces off with Drew in the middle of the ring now. They start brawling. Drew with a clothesline. Reigns levels Drew with a boot to the face. Reigns pounds on Drew to keep him down now. Sheamus grabs Reigns from behind and they start brawling. Reigns and Sheamus tangle into the corner. The other stablemates all hit the ring and the big brawl continues as SmackDown goes off the air. 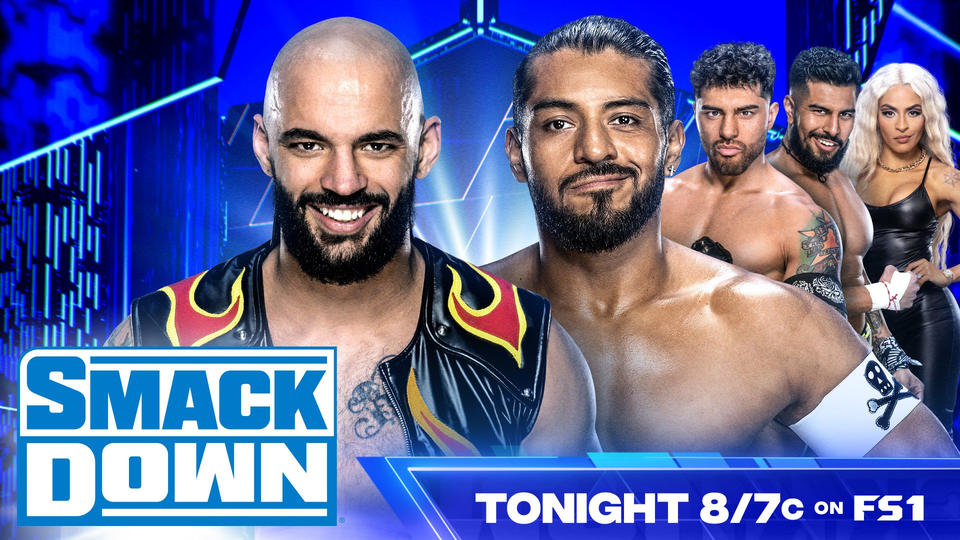