Giovanni Vinci Has Been Officially Called Up To Smackdown – As noted earlier, Clash at The Castle saw Ludwig Kaiser come out to introduce WWE Intercontinental Champion Gunther for his win over Sheamus. However, Kaiser first demanded the crowd show respect for Giovanni Vinci, who stood next to Kaiser in a surprise appearance. The former Fabian Aichner and the former Marcel Barthel then reunited with the former WALTER as he made his entrance.

The announcers acknowledged how this was the Imperium reunion, and they used the name Imperium multiple times throughout the match and segment.

In an update, Vinci has now been called up to SmackDown as he is listed as a blue brand Superstar on the official WWE website roster. His last NXT match was a loss to NXT North American Champion Carmelo Hayes at Heatwave on August 16.

There’s no official word yet on if Imperium will stay together now that Clash at The Castle is over, but Vinci’s call-up indicates that they will. It seems like Imperium would be a strong faction for the main roster, and a special attraction for the NXT Europe brand that is scheduled to launch in 2023.

Imperium previously worked the NXT and NXT UK brands, but they split up after Kaiser and Vinci failed to defeat NXT Tag Team Champions The Creed Brothers on the April 5 NXT episode, which came after a few weeks of tension within the group. Vinci walked out of that match, and Gunther later lost the main event to NXT Champion Bron Breakker that night. WWE then brought Kaiser and Gunther to SmackDown on April 8, and they’ve been there ever since with Gunther winning the Intercontinental Title from Ricochet on the June 10 SmackDown. WWE began airing NXT tease vignettes for the Vinci character on the May 24 NXT show, and he then debuted with the new gimmick on June 14 with a win over Guru Raaj.

Giovanni Vinci Has Been Officially Called Up To Smackdown 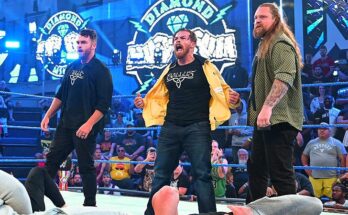 Gallus Have Been Suspended Indefinitely