Why Bayley Shaved Michael Cole’s Name On Her Head – During the women’s Royal Rumble match last weekend, Bayley supported a strange tribute to Michael Cole by shaving his last name on the back of her hair. Bayley posted a photo on Twitter tributing her match to him. Many people thought it was strange, especially due to the fact that Cole wasn’t even announcing the women’s rumble match.

On the latest episode of the WWE After the Bell podcast, host Corey Graves discussed Bayley shaving Cole’s name on the back of her head and shared that he was a part of the rib. He said he actually was with her when it happened and forgot to mention to her that Cole wasn’t going to be announcing the match even though he knew in advance.

“I might have played the best unintentional rib in wrestling history,” Graves said. “We were in the barbershop at the ThunderDome earlier in the day and Bayley walks in and starts asking about what she should put in the back of hair, she actually suggested the name Cole. I go ya, that’s a great idea, I think it’s going to be funny and down right hysterical I can’t wait to see his face when he realizes what you did. About 3 hours later I get a text from Cole and it’s a photo of Bayley and a reminder that Cole was not calling the Women’s Royal Rumble match.

“I did know that, but I didn’t realize it at the time. We had a full blown conversation about how hilarious it would be and even I forgot Cole was going to be ringside. I encouraged Bayley to shave Michael Coles name in the back of her head basically for no one’s entertainment but my own. Bayley was none too thrilled with that, but that was my highlight.”

Graves said he didn’t realize how ridiculous it was until she walked down to the ring and made her entrance in the match. He said the rib really backfired and looked random due to Cole not even commentating the match.

“I got the text and laughed about it and It never registered like oh my god, Bayley is going out there with Michael Cole’s name shaved in her head,” Graves said. “That doesn’t make any sense to anyone except for she and I now as an attempt to rib Cole that backfired.” 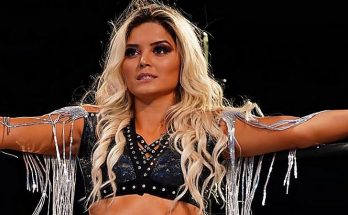 Bayley Pays Tribute To The IIconics After Their WWE Release