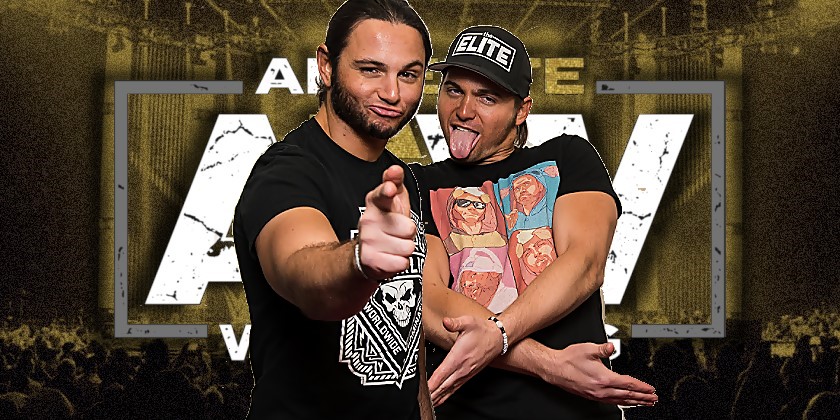 Below are highlights from the latest Being the Elite:

* Nick asks Matt if he has a shirt he can wear, Matt throws him a Young Bucks – Bullet Club shirt. They say those were some good years, and Matt relives a story from 2016 at the Tokyo Dome Hotel. Cut to the Young Bucks sitting and talking with Karl Anderson and Luke Gallows. They have a laugh and Nick says when your Bullet Club, you’re Bullet Club for life. Nick continues that Gallows and Anderson won’t leave them, like AJ Styles did. Matt then talks about how he and Nick always want to take things to the next level, maybe one day open their own wrestling company. Matt asks if Gallows and Anderson would come with them. They seem to like the idea and do the Bullet Club hand signal. Young Bucks leave the room. Anderson says to Gallows, “What the f— are they talking about?” Gallows responds, “You know this Bullet Club thing is getting us to New York, right?” They talk about going to WWE and Gallows says one day they will tag with “Hunter.” “There’s two Pauls in that company that I want to work with, and I know neither of them f—ing like me,” Gallows says.

* Young Bucks traveling montage as they make their way to Dynamite.

* Backstage, Matt hanging with Kenny Omega. Matt says he was so proud of Omega dumping out that beer that FTR gave him. Matt says not many people can just come out and be religious, and say they are “Christian AF.” Omega says it’s just a lifestyle choice for him, he’s never really been into drinking. Talks a bit about religion, but says he was thinking more about being “Scientology AF.”

* John Silver and Alex Reynolds roll up on Isiah Kassidy, he immediately leaves the room. They see Nyla Rose and see if she’s interested. “No, I don’t want to join your stupid cult.” They try to convince her and offer up some Kool-Aid. She just so happened to have a “F— You” silly straw and drinks some. Silver is super mad and Reynolds has to take him away.

* Christopher Daniels standing in the rain and shows off his “This is the worst year I’ve ever lived in” shirt. “Without a doubt,” Daniels says.

* Backstage, Matt Jackson talks with Matt Hardy about him working with Private Party. As they enter a room to talk some more, Matt is now “Big Money” Matt. Jackson says he’s the worst Matt of them all. Hardy calls him an a-hole and that he should sue the Young Bucks for stealing the likeness of him and his brother. Jackson tries to get him to leave and come back as another person. Hardy says no way and wants to talk about the Young Bucks shooting money around during their entrance (as he waves money around himself). Hardy says he has heat with the Young Bucks over that, and out comes “Broken” Matt to explain what heat means in pro wrestling. Hardy steals the money of out “Big Money” Matt’s hands and unfreezes the scene. “Big Money” wants to know where it went! He leaves the room and a second later “High Energy” Matt comes in to talk about getting AEW giving him free drinks, food, and tanning spray! Jackson is getting annoyed and says it’s exhausting being Hardy’s friend, “I’m blown up” he says. “Broken” Matt returns to explain that term.

* Cutler asks Best Friends and Orange Cassidy if they have a bit. They said Trent’s mom was in a segment, they got a bit. Cutler says that was more Dark Order than theirs. The guys say they will come up with something soon. They can’t think of anything, Trent finally says they should just kill Cutler (which Cutler hears). They all agree on that.

* Clips from Dynamite are shown.

* Backstage, Hangman Page sees Omega, but Kenny isn’t happy that Page was having a drink with FTR. Page says it was fine, they just came for a drink, what else should he do? Omega says they embarrassed him tonight, Page says he had it coming though for what he did. Page says it’s a North Carolina boys thing, they got Omega, Omega got them. Omega says if Page is fine with it, he’ll move on…it just happened on national television. Omega walks off and talks with the Young Bucks in another room. Luchasaurus and Jungle Boy enter and ask Omega what was up with the post-match attack on Marko Stunt. Everyone in the room think Omega should at least go check on him while he’s getting looked at by the doctor. Omega goes over and asks Stunt how he’s doing. Kenny says he was in a bad mood and he just took it out on Stunt. Marko says he’s always looked up to Kenny and it really hurt his feelings. “Never meet your heroes,” Stunt said. Omega says he’ll make it up to Stunt and heads out. He pauses in the hallway, “Don’t meet your heroes,” Omega laughs to himself, “F—in’ p—y.”

* Colt Cabana is sure Omega is relaxed by now. He’s about to go into Kenny’s office, but Griff Garrison stops him and says Omega is going to murder him if he does that. Colt decides not to and thanks “Jungle Boy” for the advice. Garrison says who he is, Colt thanks him and Garrison heads off. Colt looks at the camera, “Who the f— is Griff Garrison?”

* Matt and Nick talking about TV ratings between NXT and AEW. Matt is so bothered the 50+ demo isn’t interested in AEW. Nick wants to know what they should do to get that audience to tune in. Matt says what would Grandma and Grandpa like? Cut to Matt talks in a calm voice with piano music playing the background as he showed off his garden.

* Backstage, Private Party go see the “Dr” about Kassidy’s back, but it’s actually Nick. They think there’s a new nurse, but it’s Matt under the mask. They don’t believe him until he pulls down the mask and does the “Deadass” line.

* Dark Order bickering about wearing masks. Silver says Grayson is the ugliest member of the group and he doesn’t have to wear one. Brodie Lee tells them to be quiet. He asks about what’s going on and Silver starts talking loudly again. Lee quiets him and asks Reynolds why it’s away Silver…Reynolds says he’s a kid, “I’m 29!” Silver says. Lee responds, “I have an eight-year old, okay? My eight-year old is not a f—ing idiot. John Silver is a f—ing idiot.” Lee then opens his coat and has not one, but two packs of paper to throw at Silver. The rest of Dark Order bail, Silver tries to leave, but Grayson shuts the door on him. Silver yells for his mom as Lee gets closer.

Kyle O’Reilly Provides An Update On His Injury