The Hardys spoke with SPORTbible on a number of wrestling topics. Here are some of the highlights:

After returning, seeing Vince McMahon for the first time:

Matt: “It was cool, it was very quick – the first time we saw him [Vince] physically face-to-face was in ‘Gorilla Position’ right before we went out and it was ‘Hey, good to have you home, hug, hug’ and then it was out to the ring to go and partake in a ladder match.”

Jeff: “I would say the spear [from Edge], Wrestlemania 17 because I had always wanted to hang from those things that held those titles and we finally got to do it. Just to see that come from my mind to reality was breathtaking, and for it to be so good, it’s one of the biggest things that stands out to me – that spear. I would say [it is] one of my craziest stunts for sure because that was a pretty long fall, but then the Swanton I did on Randy Orton years ago back in about 08 or 09, it was like 32 or 33 feet – that was pretty massive so that’s up there with the swantons but all the TLC matches I hold dearly and always will.”

Matt: “I liked the first tag team ladder match we had, the first TLC match we had in theory was the triple threat ladder match at Wrestlemania in 2000 – it was a great match, it was a spectacle but looking back because I’m older, there’s a lot of things that bother me from a psychology standpoint but we were just three young teams, it was our first Wrestlemania and we went out there and they said ‘Don’t worry about time, timing’s not an issue, we know you guys are doing a ton of crazy things, don’t rush’. We were literally given a spot on Wrestlemania and told not to worry about time – that doesn’t happen, that’s not a real deal. That match was great, it was a spectacle and one of my favourites. Summerslam that year it got a little better, I thought it was strong from a storytelling and psychology standpoint, and then I thought Wrestlemania 17 was even better – I thought it continued to improve and evolve as we got better.”

Jeff: “I think the brotherly feuding might be over, I don’t think people really want to see us fight each other but when you think back to the beauty of the Final Deletion, if ever something like that comes into play again then that’s the only way I see us doing something like that but it’s inevitable that we’ll go do our solo things before we’re done but right now it’s all about the tag teams.”

Matt: “Speaking from my perspective, I think right now our goal, especially starting, coming back, being reintroduced to the WWE universe after being away for a substantial amount of time, really was to be a tag team – we became famous for being a tag team. I think down the road there will be a potential for both of us doing our own things; we’re both strong singles personalities in many ways, and I think as performers we’ve grown as we’ve got older; we’ve got smarter. Just for starters, if we get to where we need to be, I think ‘Broken’ Matt Hardy against Bray Wyatt would be an amazing deal, and you look at him [Jeff] – him vs Seth Rollins, him vs Finn Balor, either one of us vs Roman Reigns – there’s a lot of cool, interesting combinations of guys who became stars in the last five or six years that we’ve never worked against, it’s totally like a fresh slate. So there’s a lot of potential forces as singles competitors also.”

The Hardys also discussed their first WWE ladder match and working in Ring of Honor then Wrestlemania the next night. You can read the full interview by clicking here. 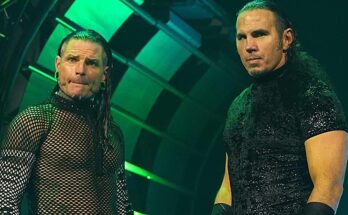