The WWE ThunderDome residency at Tropicana Field in St Petersburg, Florida is coming to an end after next week as the company prepares for WrestleMania 37 Week.

WWE has a final set of tapings scheduled for Friday, April 2, which will require several pre-tapes, according to Jon Alba of Spectrum Sports. WWE’s final date at Tropicana Field will be Friday, April 2.

Alba notes that some areas of Tropicana Field are already being converted back to the baseball setup as the MLB’s Tampa Bay Rays will have their first home game on Friday, April 9.

WWE plans to tape the April 2 SmackDown show on Thursday, April 1, and then tape the WrestleMania 37 go-home edition of SmackDown, airing on April 9, on Friday, April 2, the week before it airs.

WWE is taping SmackDown this way for “lots of reasons” including costs and the fact that it’s WrestleMania Week. The episodes are not being taped out of order, but they are airing the April 2 episode on the same day they are taping the April 9 episode.

The WWE Hall of Fame induction ceremonies for the 2020 and 2021 Classes will also be taped over two days at Tropicana Field before WWE wraps up the residency. It was recently reported by Fightful Select that the Hall of Fame ceremonies would be taped the Tuesday (March 30) and Thursday (April 1) before they air on Tuesday, April 6 via Peacock and the WWE Network.

WWE ran the Yuengling Center many years ago before there were bigger options in the area. The 1995 Royal Rumble pay-per-view was held in the arena, along with Saturday Night’s Main Event in December 1985 and SNME in December 1988. WWE would have a short move from Tropicana Field to the Yuengling Center as the drive is around 30 minutes. It’s been reported that WWE wanted to keep the ThunderDome in or near the Tampa area after WrestleMania.

The following tapings schedule has been confirmed for the final week at Tropicana Field:

The current WrestleMania 37 Week TV schedule looks like this: 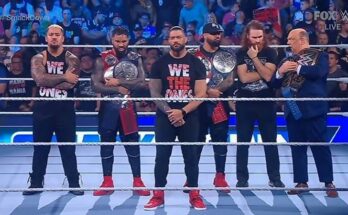