MJF may soon not be a double company contracted talent if Mance Warner has any say in the matter.

Warner has been having himself quite the bitter feud with The Dynasty on MLW Fusion. From Mancer luring the crew’s big man Logan Creed away by sharing in some comradery over light beers to The Dynasty beating down his Uncle Moon Man, tension is tighter than a Von Erich claw between the two parties.

It prompted the Brawler From Bucksnort to issue a Loser Leaves MLW match to MJF, who attacked Mance while he was at the pay window in Philadelphia. In a heated moment of bravado and confidence, MJF accepted his challenge and now MLW shares details of the bout below which is set to go down this Saturday on MLW Fusion:

MJF vows to be in the best shape of his career when he battles Mance Warner in the much-anticipated upcoming loser leaves MLW empty arena match this weekend on FUSION.

The bout will take place at an undisclosed location in an empty arena to minimize the risk of outside interference, given the Dynasty’s history.

Both MJF and Mance Warner will be taken directly to the undisclosed venue 60 minutes prior to the bout and will not be informed in advance of the locale.

This hasn’t stopped the Dynasty from throwing money around to get intel on where the big showdown is taking place.

With such high stakes for MJF, a source close to the quartet claims his fellow bros have assured the elitist they will be in the building and guarantee it will be Mance Warner hitching a trailer to his pick-up truck and exiting MLW this weekend.

Given the Dynasty’s schemes over the past year in MLW, what could Alex Hammerstone, MJF, Richard Holliday and Gino Medina have in store for Warner? According to a source, “(the Dynasty) are throwing money and muscle around sparring no expense. They want to rid themselves of this guy Mance Warner at all costs.”

Will the Dynasty secure MJF’s future in MLW?

Will this be ol Mancer’s last stand?

Wardlow Says MJF Is Wholeheartedly A Piece Of S**t’ 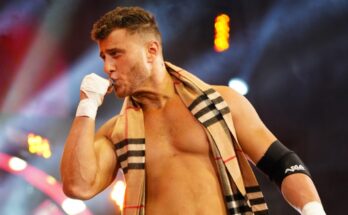