Josh Mathews and Don Callis welcome fans to Impact Wrestling! The first match of the night is announced!

The North vs. TJP & Fallah Bahh

Bahh and Josh Alexander start the matchup. Alexander corners Bahh and tags in Ethan Page. Bahh counters The North and tags in TJP. Both Bahh and TJP do a combination kick/body slam. TJP with a few lightning strikes, goes for a quick tag to Bahh. Bahh pulls off a powerslam on Alexander. TJP is back in. He chops Alexander. TJP heads towards the ropes, Page grabs a hold of him on the outside. Alexander sends TJP down with a European uppercut. Page tags himself back in. Page has TJP up in the vertical suplex position. Alexander tags himself in and helps Page with the suplex. Alexander blocks TJP from grabbing a tag from Bahh. Alexander sends TJP towards his corner. Page comes in after a quick tag is made. He locks TJP’s arms up in the surfboard position. TJP refuses to tap, he reverses out of the hold with a rana. After, TJP lands a tornado DDT on Page and tags in Bahh. Page tags in Alexander. Bahh’s intensity shines with a Samoan Drop on Alexander. Alexander strikes Bahh and Bahh is getting motivated after each hit. Bahh climbs back up and gestures “No, No, No,” and powerbombs Alexander. Bahh with a cover, Page comes in to break the pin. TJP pops up to the top rope and Page pushes him off the ropes. TJP with a spinning kick on Alexander. Page lands a cutter on Bahh. The North goes back-and-forth with kick/strike combinations. TJP sneaks in and grabs the pin. TJP and Bahh win!

Backstage: Gabby Loren asks Tessa Blanchard if she is ready to face Taya Valkyrie for the Impact World Championship tonight. She says that tonight is special. She is ready to retain. Eddie Edwards interrupts the interview and says he respects Blanchard, but he wants a shot at the title, if she retains tonight.

Moose comes in swinging and sends Williams down with a clothesline. Moose strikes Williams multiple times. Moose Irish Whips Williams into the corner. Moose comes at Williams and Williams puts his feet up in time to block Moose’s attack. Williams dives through the ropes and sends Moose down on the outside. Back in the ring, Moose throws Williams on the top rope. Williams makes his way back in the ring. Moose sends Williams into the turnbuckles. Moose does it again after Williams gets back up. Williams counters Moose’s powerbomb with a DDT, followed by a flat linear. Moose escapes the Canadian Destroyer and lands Snake Eyes. Moose spins Williams and ends the match with a spear. Moose wins the match.

After Moose’s match, the Impact Plus Moment of the Week is shown.

Backstage:Madison Rayne is running her own boot camp with the Gut Check women. Kiera Hogan comes in to see what is going on.

Ryan looks like he was about to oil himself up, but doesn’t do it. Instead, he tries to get Romero to touch “It.” Romero crashes into Ryan with a clothesline. Ryan climbs back up, Romero is hypnotized by “It” and falls down. Romero sends Ryan into the turnbuckle, then follows it up with a crossbody. Romero is getting himself pumped up and clotheslines Ryan in the corner. Ryan grabs his lollipop out of his pants and sticks it in Romero’s mouth. Romero accidentally touches “It.” Ryan for a second, contemplates if he is going to put Romero through the D–K Flip. While he’s contemplating, Romero lands a hard elbow on Ryan and wins the match.

Backstage: Ryan is talking to Katie Forbes and Rob Van Dam. He feels conflicted about how the fans view him. He’s glad that they all feel the same way.

Su Yung vs. Havok (In A No Disqualification Match)

Havok wastes little time and strikes Yung. Havok throws Yung into the corner, Yung counters with a palm strike as Havok runs towards her. Yung rolls off the apron and lands on Havok. Yung goes old school and climbs the barricade, Havok picks her up and slams Yung on top of the ramp. Havok grabs a few chairs from underneath the ring, as well as a garbage can. Havok sees Yung sitting by the steel stairs and runs towards her. Yung moves out of the way in time and Havok slams her shoulder into the stairs. Both women pick up chairs and hit each other with them. Havok takes Yung down with a big boot. They both get back up and exchange back-and-forth strikes in the middle of the ring. Yung grabs the rope and tries to wrap it around Havok’s neck. Havok removes the rope around her neck. She grabs hold of Yung and sits her atop the top rope. Yung lands a dropkick on Havok. Yung covers, Havok kicks out at 2. Yung grabs the rope again and has it wrapped around Havok’s neck. She tries to tighten it, but Havok counters. Yung is tied up on the ropes and sprays the red mist on Havok. Yung wraps the rope around Havok’s neck and locks in the mandible claw. Havok begins to fade. The referee calls for the match to end.

Post-Match: The Undead Brides arrive with a coffin. Havok refuses to get into the coffin and go to The Undead Realm.

Backstage: Jimmy Jacobs finds Rosemary and asks her about her thoughts on the match. Rosemary feels like there’s something wrong. She believes they need to retrace their steps.

Cousin Jake and Gilbertti start the match. Jake powerslams Gilbertti and tags in Cody Deaner. Gilbertti tags in Swinger. Swinger twists Deaner’s arm back. Deaner reverses the lockup. Jake is back in. Swinger runs over to his corner. Gilbertti has a roll of quarters in his hand and swings at Deaner. Swinger lands a low blow on Deaner. Deaner gets up and he and Swinger collide with double clotheslines. Jake is tagged in. He cleans house. Deaner ends the match with Giv’er Done.

Post-Match:A glitch pops up from “ICU.”

A vignette is shown of Tenille Dashwood walking around Las Vegas.

After, the second episode of Gut Check is shown.

Next, a video package leading towards Valkyrie vs. Blanchard’s historic championship match is shown.

Backstage: Valkyrie sees right through Blanchard. She doesn’t believe this “sweet act” that Blanchard is trying to play. She believes that the fans have been drinking too much of the Blanchard Kool-Aid. She’s ready to be the bad guy and win the title!

And now, both women make their way down to the ring. Their main event match is next! 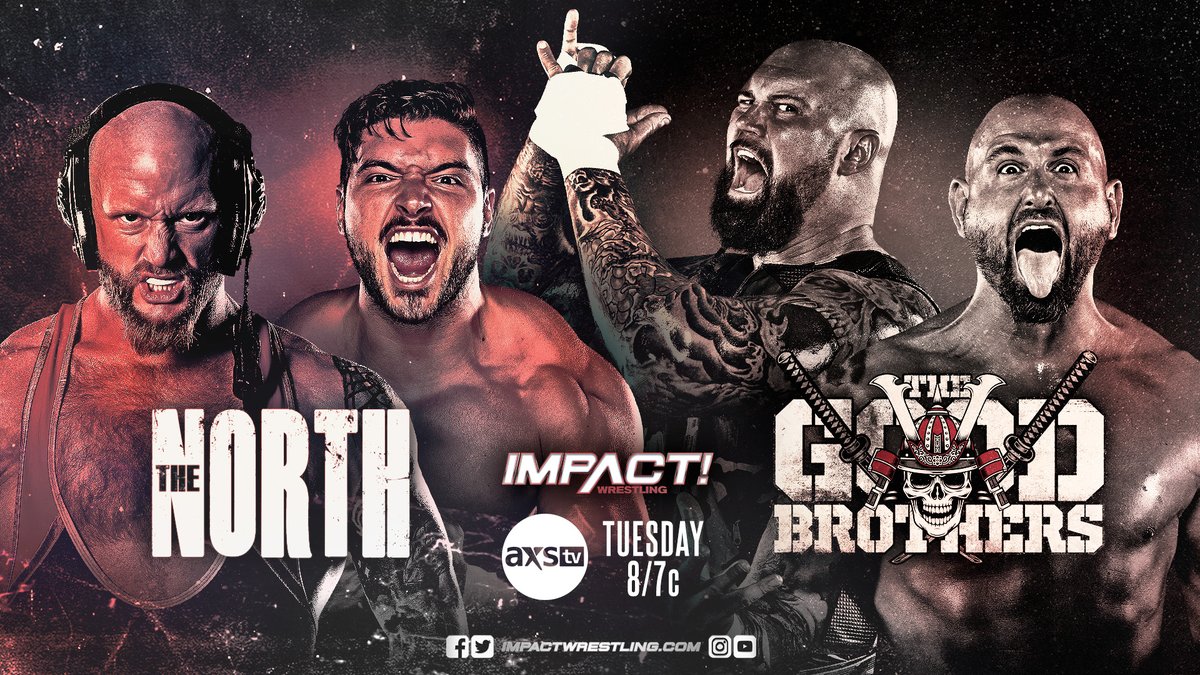