Raquel Rodriguez will be out of action for 4-6 weeks, according to WWE.

Friday’s Survivor Series go-home edition of SmackDown saw SmackDown Women’s Champion Ronda Rousey and Shayna Baszler attack Rodriguez backstage, right before she was to team with Shotzi against her attackers.

Shotzi later noted in a backstage interview that Rodriguez suffered a broken arm and a dislocated elbow, and aggravated the injury during the tag match.

Rousey would go on to retain over Shotzi at Survivor Series. Rodriguez appeared backstage, wearing a brace on her arm, and she was not at ringside as Michael Cole noted that she was not medically cleared to be at ringside.

It was also announced that Rodriguez will be out of action for 4-6 weeks.

There’s no word on specifics of Raquel’s injury, but we will keep you updated. She has not publicly commented on her status as of this writing. 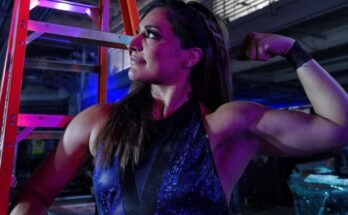