Johnny Impact spoke with Interactive Wrestling Radio on a number of topics, here are some highlights:

On working with Impact Wrestling for the past 6 months:

“Surprised! I don’t know what I expected. (laughs) SOme people have negative opinions of Impact for some reason. I’ve noticed that before I even went there. When I went there, a lot of the people… Bobby Lashley, Chris Masters (Adonis), Alberto El Patron are people I’ve known and got along with back in the day. People in the office, kind of the same thing. There’s a lot of new people involved. Desmond Xavier, for example, is somoene I’ve got to work with on the independents. Trevor Lee, same thing. ANd, Eli Drake who I really got to start working with at Impact. They’re all super talented and nice and all almost as good as Johnny Impact. That is a pretty high compliment coming from me. (laughs)”

On the name Johnny Impact:

“If I had my wrestling career to start over again, I’d stick with one name throughout. But, I’m going to just keep on switching. Johnny Impact? Sure. Might as well name yourself after the franchise, right? It has a certain charm to it. To me, it sounds like a cheesey 80’s name like, “JOHNNY IMPACT!” It’s fun. It’s a lot of fun! Wrestling at its best should be fun!”

“Yeah, absolutely. One of the things that makes wrestling uniquely wrestling is the interaction between the live crowd and the performers in the ring. Absolutely, I love live events (house shows). That is one of my fondest memories when I was a kid was going to the Western Forum and seeing the Bushwackers, Shawn Michaels, and the Macho Man back in the day. Doing live events is always a cool thing.”

On Eli Drake’s questioning of signing Impact in a priour interview:

“Well, they have a stacked roster. But, when you’re playing poker and you have a chance to pick up an Ace of Spades and maybe a wildcard, you do that. You take that opportunity. (laughs) Sure, Eli Drake might be a Jack or a King, but when you’re showing your cards, the Ace of Spades always trumps those cards. (laughs) I also think that was before he (Eli Drake) got to know me. He’s happy with the situation, I just put words into his mouth. That’s one thing Eli doesn’t need is more words coming from his mouth. (laughs) I’m really stoked to be part of the Impact roster.”

On if he still wants the Impact Global Title:

“Nah, I thought I’d fade into the mid card. (laughs) Every wrestler in the locker room wants to be champion. That is what we’re here for. Of course I still want to be champion at Impact.”

On his Impact theme music:

“I take people to Slam Town no matter where I go. I’m really digging my Impact theme. When we were talking about themes, that old school, 80’s “Real American”, Shawn Michaels, 80’s rock is really what I had in mind, man. Johnny Impact is such a fun name, I wanted to have a fun rock vibe on the entrance. It pups me up everytime I hear it. Do you think I should add lyrics to it?”

On his relationship with Taya:

“Yes, the Queen will be back in Orlando. I”m excited to head back to Orlando but more excited to be part of another Impact taping. I’m excited for what I’ve got lined up for 2018 not the least of which is a sweet wedding on June the 1st between the 2 of us.” He continues, “Probably the most important thing in my life, ever, is her. I’m really glad we found each other when we did. Man, I’m turning this wrestling interview into a cheesy sentimental thing. But, that’s what happens when you have someone like Taya. (laughs)”

On Boone the Bounty Hunter:

“Boone is doing great. I have noticed a lot of people have purchased Boone to give as a holiday gift. The coolest thing about Boone the Bounty Hunter aside from sailing in foreign territories as far as producing, writing, and starring in the film, is the reaction that I’m getting from those that have seen the movie. People have really liked Boone which is really cool for me. Like I said, I wrote it, produced it, paid for it, worked forever to finish it. Really tried to finish it at as high of a level as I could afford with money as well as time. Sometimes with films… There’s a quote that Michaelangelo probably said. “The painting is finished when you put the brush down.” You can work on movies forever. You really can. To see how Boone came out and how people have reacted to it has been awesome.”

On Rampage Jackson in Boone:

“He’s a die hard wrestling fan. I saw him, in one of his old fights in Japan, legit powerbomb someone in an MMA fight. He’s also a super bad ass dude and a nice guy. Can’t say enough good things about Rampage!”

On the music in Boone:

“The song in the opening segment is by a band called Supa Group, not AC/DC. They’ve been around a while. They just have an arena rock style. No, no. We could not afford AC/DC. Let me tell ya! (laughs)” 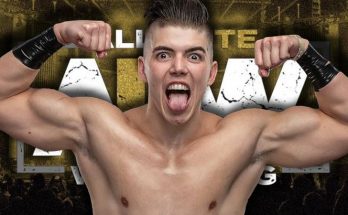