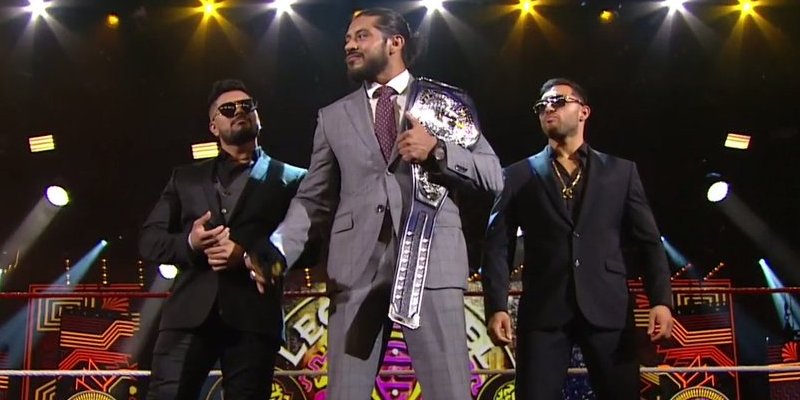 The group, now called El Legado del Fantasma, hit the ring and Escobar cut a promo on how they plan to right the wrong of others to show everyone what a true lucha libre artist is.

Escobar talked about how the lucha culture used to rule the ring but the historic tradition turned into a sideshow as fans settled and were led to believe that lucha libre is just a bunch of guys in masks doing flips. Escobar said that is wrong, and now his group will restore the honor of lucha and leave a legacy they can be proud of.

Escobar was then confronted by Drake Maverick, who was triple teamed for a second time two weeks ago. Drake removed his neck brace and rushed the ring but was beat down again. Breezango’s Fandango and Tyler Breeze then made the save and cleared the ring to stand tall with Drake.

Fandango issued a warning that Escobar and his group won’t be able to hide next Wednesday during Night Two of the Great American Bash. The announcers then confirmed the six-man match for next week.

Below are a few shots from tonight’s segment at the NXT Arena on the campus of Full Sail University in Winter Park, FL:

More than a mask.