On this week’s “Oh You Didn’t Know” podcast, Road Dogg gave his thoughts on Asuka and he had a lot of good things to say. He praised her as someone who could be the female Roman Reigns.

“I think as far as presentation, in ring skills, dare I say promo skills just because I love what she does and how she represents herself via her verbal skills,” Road Dogg said. “I just love it and I think everybody else does too. I think she should probably be the Roman Reigns of women’s wrestling right now. It’s just my opinion.”

Road Dogg said that he knows that some people would say that she can’t cut a promo in English but it would be totally fine if she spoke in her native Japanese language. Road Dogg said, “I know the big argument is, well, she can’t cut a promo domestically. I think we’re past that as a culture, as a society. I think it’s totally okay if she spoke in her native tongue and we subtitled it. I think it would be totally fine how we do it now where she just goes off and you don’t know what she’s saying but you know she’s saying something that ain’t nice to you. You know what I mean?”

Road Dogg put over Asuka’s in-ring work. He said,” I think her work and her grasp mentally of just putting together a match and keeping her character strong in the match yet being selfless and selling for everybody, is probably the best female wrestler in the world. I know people will doubt that. I always say Zoey Stark is one of the best female wrestlers I’ve ever seen and I firmly believe that, but I believe it’s more from an athletic standpoint and her in-ring work supersedes who she is, and I think Asuka’s in-ring work matches who she is so it just makes her a magnanimous star. She’s incredible. Asuka is incredible.” 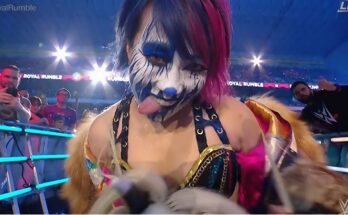