Solo Sikoa signed with WWE in August 2021, and made his WWE NXT debut at Halloween Havoc on October 26 of last year, but he didn’t meet WWE Chief Content Officer Triple H until his main roster debut earlier this year.

Sikoa recently spoke with Joseph Staszewski of The New York Post and was asked how his first year in WWE has been, going from his start in NXT, the quick NXT North American Title run, and now his involvement in the biggest storyline on RAW and SmackDown with his family, The Bloodline.

“It’s been a roller coaster,” Sikoa responded. “When I got hurt in August (PCL sprain) I thought things were gonna change and the next thing you know, I got the call to come up for Clash at the Castle. Everything was just happening fast. Making the transition from NXT to the main roster I think personally for me was easy because I had my brothers up there. I had Sami (Zayn) up there and Roman and Paul (Heyman) up there to help me and guide me. It’s been fun. I’m having a blast.”

Sikoa was then asked about his main roster call-up at WWE Clash at The Castle on September 3, where he helped Undisputed WWE Universal Champion Roman Reigns retain over Drew McIntyre in the main event. The Enforcer of The Bloodline revealed how he was cleared from his PCL sprain on Monday, then he flew out on Friday for the Premium Live Event on Saturday.

“It was actually from Roman and Hunter (Triple H) . I just got the call saying my flight is getting booked for Clash at the Castle, but I was still hurt at the time,” Sikoa revealed. “I got cleared just in time before flying out. I got cleared on a Monday and I flew out on a Friday. When I got there, nobody said anything to me. Everybody was just like quiet, even Roman and Paul. I knew what I was there for but I didn’t know because the mission wasn’t clear.”

Sikoa then recalled how his first conversation with Triple H went.

“When we were getting ready to open up doors for Clash at the Castle, Triple H walks in and this is my first time meeting him,” Sikoa said. “Then he goes, ‘You know this is your call-up?’ I was like, ‘Nah I didn’t know.’ ‘Welcome to the main roster, you’ll be on SmackDown.’”

Solo added when asked if he was told just hours before the show about what was going to go on that day, “Like an hour before the show started. Nobody knew I was there. I’m watching rehearsals from the back from Roman’s locker room.” 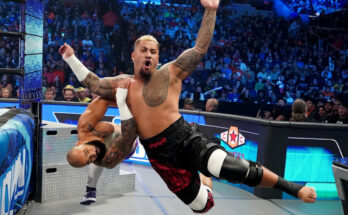