Emma Talks WWE Return – Emma was the latest guest on Ryan Satin’s Out of Character podcast, where she discussed her decision to come back following her run with IMPACT ending, and how she ended up getting paired with her real-life boyfriend, Madcap Moss. Highlights from the interview can be found below.

On her decision to return to WWE after her run with IMPACT ended:

I guess it would have been within a few months of when Triple H returned. I was working with IMPACT and my contract was coming up. Maybe, without even realizing it, I had this idea in my mind that maybe I’m done with IMPACT and maybe there are other options that I should explore and see what’s possible. That was probably coming from me watching WWE and seeing all these awesome changes with Triple H and what he was doing, and I know I had that good rapport with him and all the stuff we did at NXT. Probably, in the back of my mind, I started thinking like, ‘I wonder if I could actually go back to WWE.’ It was within a short time after that, probably a month or two, we ended up in touch. He said to me that he had been meaning to reach out even sooner, that I had been on his list, and he’s just been swamped, as you could imagine. That’s kind of where the conversation finally kicked off and then went from there. Next thing you know, I’m actually back. I joked about it so many times, all of a sudden it was like, ‘This is actually happening, I’m coming back to WWE after five years.’

Talks getting paired with Madcap Moss:

I’m still kind of pinching myself sometimes because I really enjoy what I do. Even Madcap and I, we joked about it so many times, ‘imagine if we worked together’ and all these storylines we joked about and things we would do, and then I actually end up back, on the same show as him, and then in a storyline together, which we had never discussed. We joked about, but we never really thought it would happen and we didn’t discuss it with other people.

Confirms that the pairing wasn’t her idea and just happened organically:

That wasn’t us. It may seem like maybe it was, but he has his own ideas and I have mine. I just thought, ‘okay, they’re bringing me back,’ and I had this and that in my mind, and a week or two in, they said, ‘we’re going to put you guys together.’ ‘This is cool, we get to be together and an on-screen couple, what a cool thing.’ We’re definitely making the most of it. 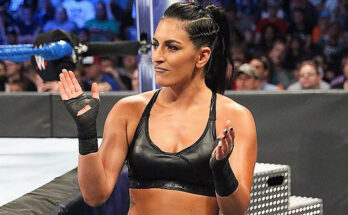