FTR successfully retained their ROH World Tag Team Championships against The Briscoe Brothers in an iconic two-out-of-three falls match in the main event of ROH Death Before Dishonor, but the match did leave FTR member Dax Harwood battered and bruised afterward.

Harwood recently revealed that he wrestled the first match with The Briscoes at ROH Supercard of Honor XV with a torn labrum that he originally suffered at AEW x NJPW Forbidden Door, where the group won the IWGP Tag Team Championships. Sporting a bandage above his right eye during the Post Show Media Scrum, Harwood explained to Wrestling Inc. Managing Editor Nick Hausman why an ROH doctor checked on him during the rematch.

“It’s Saturday, so it depends on the day, I’m dealing with something different every day,” Harwood said when asked how he was feeling after the match. “Tonight [Jay Briscoe] gave me a Saito Suplex, that is a very very dangerous move, landed kind of high. Hurt my shoulder a while back at Forbidden Door and the doctor asked me before the match how I was feeling, told him the truth.

After the match, FTR called The Briscoes back into the ring to shake their hands, which they did, calling back to the ending of their original showdown in April. Although The Young Bucks didn’t come out this time, Blackpool Combat Club members Wheeler Yuta [current ROH Pure Champion] and newly crowned ROH World Champion Claudio Castagnoli stood on the ramp with William Regal, seemingly teasing a match between the two teams of champions. Castagnoli won his first World Championship to start the show, defeating former champ Jonathan Gresham in under 12 minutes.

The Briscoes Accepts FTR’s Challenge For Death Before Dishonor 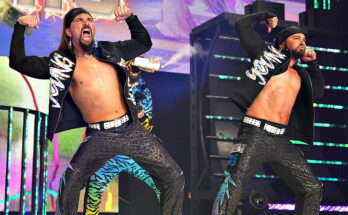