Update On Bryan Danielson’s Freak Accident – We noted last night how Bryan Danielson was involved in a freak accident during last night’s AEW Rampage tapings. In an update, Danielson’s leg injury was a work, according to Bryan Alvarez on Wrestling Observer Radio.

The Blackpool Combat Club member had his leg stuck in between the ring and the elevated rampway during the taping of Friday’s show and was locked in that position for around 10 minutes, according to fans in the arena and videos shared online. This led to some concern about his health, with AEW’s medical team being on hand to prize him free.

Despite that, the entire situation is believed to have been a work, with this being an idea that Danielson had. Everybody involved in the situation played up the concern factor, but Bryan walked to the back unassisted and gave a thumbs up to Eddie Kingston while going to the back. Bryan is apparently fine.

Danielson and Jon Moxley had been working a match against Matt Sydal and Dante Martin for the show but it was after that bout in a post-match brawl between the Blackpool Combat Club and Jericho’s Appreciation Society that the prolonged submission took place.

The two factions exchanged a war of words on AEW Dynamite this week, with Chris Jericho taking personal shots at everyone else. A major five-on-five match for AEW’s Double Or Nothing was teased but it is yet to be confirmed.

Jericho wanted a Stadium Stampede match, but Moxley was quick to shut that down. Instead, the former AEW World Champion wanted something more violent and mentioned the idea of a gang warfare match, or something with fewer rules if they do end up having the encounter.

When it comes to Danielson’s leg, there has been no official comment from either him or the company at this point. 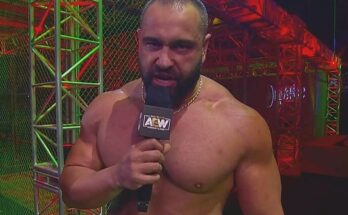