Sasha Banks Out Of Action For 6-8 Weeks – WWE provided an update on former Women’s Champion Sasha Banks earlier today, confirming reports that she is dealing with a foot injury. It was noted that Banks will be out of action for 6-8 weeks and will miss The Royal Rumble.

The full announcement can be seen below:

Sasha Banks suffered a foot injury Sunday evening at a WWE Live! event in Fayetteville, NC. After seeking emergency medical attention, it was determined nothing was broken. Sasha underwent an MRI and it was discovered she has a bruised calcaneus bone. She is at home recovering and undergoing physical therapy. She is expected to be out of action for 6-8 weeks. Stay locked in to WWE Digital for the latest updates.”

As noted, Banks wrestled SmackDown Women’s Champion Charlotte Flair at last Sunday’s WWE live event in Fayetteville, NC, and appeared to hurt her leg or knee while taking an over-the-knee backbreaker. She kicked out of a pinfall but stayed on the mat while the referee checked her out, before they went to the finish with Flair getting the win after a Natural Selection. Banks was then helped to the back.

PWInsider later provided and update stating that she was dealing with a sprained leg.

It looked as though WWE may have been building towards Banks vs. Flair at Royal Rumble, as the two have been wrestling both on television in tag matches and at live events. However, if WWE’s report holds true, Banks will miss the Rumble and as noted, Flair will be appearing as the SmackDown Women’s Champion in the rumble. If she wins, Charlotte claims she will choose her own challenger for WrestlerMania this year. 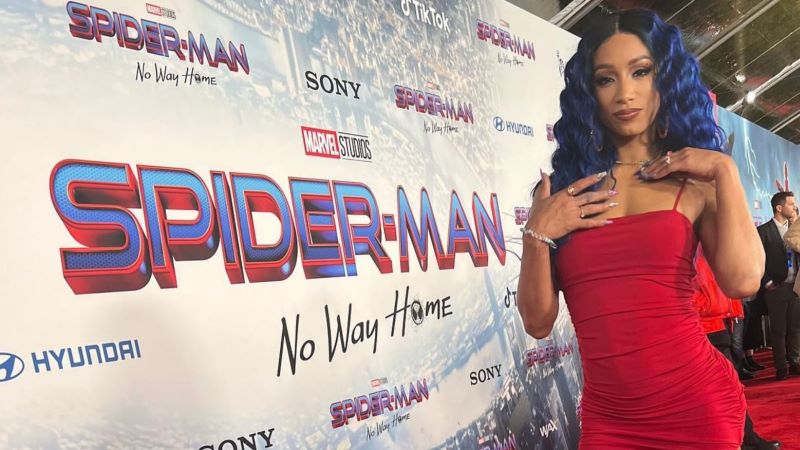 Photos: Sasha Banks On The Red Carpet At The “Spider-Man: No Way Home” Premiere