Sonya Deville’s character has undergone a dramatic change since her return to WWE television. She’s now an on-screen authority figure.

Deville says the change came about almost by accident as she was pitching an idea to Vince McMahon. At the time, she was preparing to return to WWE TV after losing a “Loser Leaves WWE” match to Mandy Rose at SummerSlam in 2020.

“It was actually a conversation with Vince where I was in his office,” Deville recalled. “We were talking about how I was gonna re-debut and I just kind of mentioned to him that I had these three-piece suits that I’d been waiting to wear on TV and that I thought a cool part of my character could be that I rock lady suits and I’m kind of a bad B, and I could be a boss.”

Sonya Deville had no idea at the time, but she was setting the wheels in motion for her transition to an authority role. Deville says that concept was not in her mind when she suggested wearing her suits on TV.

“I wasn’t speaking literally,” Deville explained. “But [Vince McMahon] kind of sat there and envisioned what I was saying with the suits. He was like, ‘Do you have one on you?’ I was like, ‘Yeah, I have my all-black one but it’s at my hotel.’”

“He’s like, ‘We’ll send someone to go get it,’ Deville continued. “Next thing you know, I was walking down the hallway in a three-piece suit. I didn’t know where it was going, and it just organically evolved from there.”

The change in look led to Sonya Deville making regular appearances on both RAW and SmackDown. She says the whole experience is proof of Vince McMahon’s creative skills.

“I think he’s so genius and so creative that I think me saying I wanted to wear suits, the wheels started spinning and this is where we ended up,” Deville said. 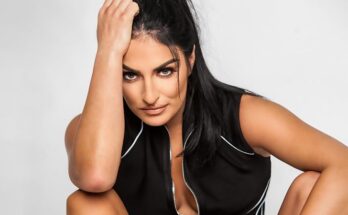