This week’s broadcast featured highlights of the InDex honeymoon, following the happy couple’s succesful wedding two weeks ago. Spread across two vignettes, fans got to see “Papa Gargano” to his best to stop Lumis and Indi Hartwell from doing anything reckless, but he only drove them into their bedroom.

Realizing his mistake, Johnny Gargano broke into the couple’s room and, to his surprise, found a long string of condoms in Hartwell’s suitcase. When Lumis and Hartwell arrived on the scene, Gargano snuck into their closet and overheard a pillowfight that could have been mistaken for a much more suggestive activity. Hartwell’s responses, such as telling Lumis to hit her “harder” contributed to the confusion.

Hartwell fell asleep, so Gargano tried to sneak out, but with Lumis’ sharp hearing, he heard Papa’s footsteps. In response, his eyes snapped open before he pulled the string of condoms out of his pocket and simultaneously gave Gargano a thumbs up, complete with some chilling eye contact. Gargano, uncomfortable beyond expression, gave Lumis an insincere smirk and a forced thumbs up in return. 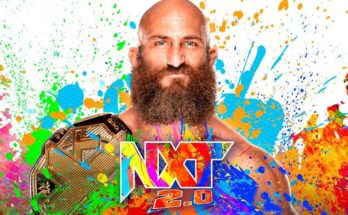