At NWA 73, Nick Aldis put his NWA World Heavyweight Title on the line against Trevor Murdoch. Murdoch would have to retire if he couldn’t win the title.

Things started with Aldis attacking Murdoch from behind as Murdoch was giving his family to his family. They fought into the crowd but the match had not officially started because the bell had not rung by this point. They fought their way up to the stage area. Aldis slammed Murdoch on the wood stage as officials, including Billy Corgan and Pat Kenney yelled at Aldis to get back in the ring. Corgan looked like he wanted to fight Aldis.

After several minutes, they made their way back to the ring and the match officially got started. Murdoch fought back with punches in the corner of the ring but Aldis came back with a boot to the face and an Angle Slam. Aldis followed up with a Lou Thesz press. Aldis tried to do the Flair spot of the top but Murdoch caught him and slammed him. Murdoch tried a move off the top but Aldis caught him and he attempted the figure four but Murdoch countered into a pin attempt and then a figure four leg lock. After Aldis broke free, Murdoch went for a move in the corner but he crashed into the ring post.

Aldis was pushed by the referee Robert King because Aldis tried to bully him. Murdoch accidentally pushed Aldis into King, which meant that Murdoch could not win until the referee got back up. The match continued with the referee knocked out and Aldis on offense. Aldis taunted Murdoch’s son in the crowd. Aldis attacked the timekeeper and then set up a table at ringside. Aldis dove off the top rope and hit an elbow on Murdoch through the table. Aldis brought Murdoch back in the ring and another referee ran out to make the count but Murdoch kicked out.

Ric Flair walked out to celebrate with Murdoch. Murdoch was also joined by his family. Flair put over Murdoch for being a great wrestler and representing Harley Race. Murdoch said he never dreamed this moment would happen. He said the fans are the reason why he kept going. Murdoch said he doesn’t know what is in his future but he will represent the title to the best of his ability. He said that he hopes to be as good as Harley Race someday. Murdoch ended by thanking everyone for their support.

Madusa To Have A Creative Role At NWA Hard Times 2 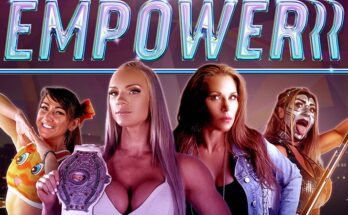