Karrion Kross picked up another win during this week’s WWE RAW from Oklahoma City.

As seen below, Kross defeated Humberto Carrillo by submission. The former WWE NXT Champion was once again sporting the new gladiator mask on the way to the ring, and the in-ring attire he debuted last week.

Kross spoke to Sarah Schreiber after the show and issued a warning to the rest of the RAW locker room. He was asked what he’s hoping to prove to the other competitors in WWE.

“There’s not a single person on this planet that I can’t knock out or submit,” Kross declared. “I prove that time and time again. There’s an old saying, that somebody out there has your number… well I’ve got everybody’s number. I almost put my elbow through Humberto’s head tonight, and if that referee wasn’t there, and I put that Kross Jacket on him, I would’ve never let go. Think about the future.” 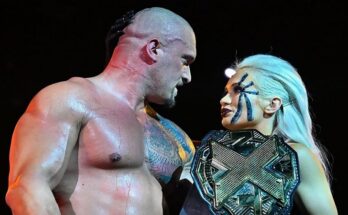