Becky Lynch Returns At SummerSlam – Sasha Banks was scheduled to face Bianca Belair for the SmackDown Women’s Championship at SummerSlam but plans changed.

It was announced that Banks was not cleared to compete so Carmella was announced as her replacement. Belair said that she will see Banks “sooner or later” but for now she was going to take out her frustrations on Carmella. Before the match got started, as we spoiled earlier via our facebook page, Becky Lynch came out to a huge crowd reaction.

Lynch tossed Carmella out of the ring and then it was agreed that it would be Lynch vs. Belair for the title. Lynch won the match with a punch and the Manhandle slam.

This is the fourth blue brand reign for Lynch. Belair won the title from Banks back at WrestleMania 37 Night One, and held the strap for 131 days.

Lynch had been away from WWE action since relinquishing the RAW Women’s Title to Asuka back in May 2020, right after announcing her first pregnancy. Lynch and then-fiance Seth Rollins welcomed their first child on December 4, a daughter named Roux. The WWE couple tied the knot on June 29 of this year.

There’s no word on why Banks missed the show, but we will keep you updated. Her status had been up in the air after she and Belair missed last weekend’s live events due to “unforeseen circumstances” but it was reported mid-week that the SummerSlam match was on. It was then reported on Friday that the match was in jeopardy once again as word going around SmackDown was that Banks may have been pulled from SummerSlam because she was not backstage for last night’s go-home show. Banks did not appear on SmackDown, but WWE continued promoting Banks vs. Belair up until tonight’s pay-per-view.

Stay tuned for more on Lynch’s return and more on Banks’ status. 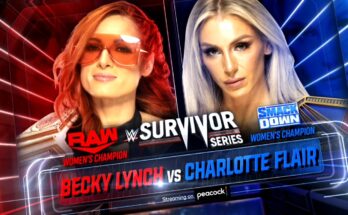