Chelsea Green explains how the “Hot Mess” made her IMPACT Wrestling return and what it was like sharing the ring with the ex-girlfriend of her fiancé.

Green took to the latest episode of her Green With Envy podcast (appropriately titled “Wrestling The Ex”) to talk about her return to IMPACT Wrestling. Slammiversary marks Chelsea Green’s first appearance in an IMPACT Wrestling ring in more than three years, and she explained why it was an easy call to make after her WWE release earlier this year.

“It was definitely my first instinct when I got fired from WWE to call my old bosses at IMPACT Wrestling. I feel like I would be stupid not to reach out and see what opportunities are available and what doors are still open, and they were. They were open. I left IMPACT on great terms with everyone, on a really positive note and I’ve kept in touch with everyone throughout the years, so I wasn’t necessarily surprised about that. It was obviously an easy call to make,” Green explained, “and I also had a lot of great conversations before I left IMPACT about how I needed to go to WWE and see what it was all about for myself. I couldn’t get let someone else tell me ‘WWE is the best’ or ‘WWE is the worst’ or ‘[its] the most toxic’ or it’s the only place you’re going to succeed. I just needed to see and decide for myself.”

Green explained IMPACT knew her goals and welcomed her back this weekend with open arms. She said she didn’t know what she would do on the show when it was first booked, which is funny because everyone assumed she’d be wrestling Deonna Purrazzo. That opponent ended up being Thunder Rosa, but Green says it was never planned for her to be Purrazzo’s opponent.

Green noted she wouldn’t get into too much detail about how the match came up, but she knew people wanted to know about the dynamic of working with her fiancé, Matt Cardona, and his ex-girlfriend, Tenille Dashwood. Green said they’ve spent time together before, including attending the same party recently, but knows what the reaction was like on social media. She said the thought of it being awkward was more awkward than the match itself, adding that Dashwood was “super cool and relaxed” and the match went smoothly.

Chelsea Green also spoke about how she was able to wrestle at Slammiversary in the first place, as she was still sporting a cast on her left arm. While she was not cleared to wrestle at last weekend’s Ring Of Honor Best In The World pay-per-view, Green said it was a lot easier to make it work at Slammiversary because there’s no wrestling commission that needed to clear her.

“Slammiversary was in Tennessee, and they don’t have a health commission, so a health commission can’t ban me from wrestling with a broken arm. See what I mean? So, I fucking did it. YOLO, right? Obviously, last week I was upset that I couldn’t wrestle for Ring Of Honor in the Women’s Championship Tournament but I understood why. The Maryland [State Athletic Commission] wasn’t having it,” Green stated, “but Nashville, however, it is balls to the wall. We were good to go, so I took the opportunity and we ran with it, cast and all.”

Green went on to explain that wrestling with a cast wasn’t too bad, and that it was a mental hurdle more than anything. She said it prevented her from training for a bit, but she finally got back in the ring, and now has her return match to look back on at Slammiversary. 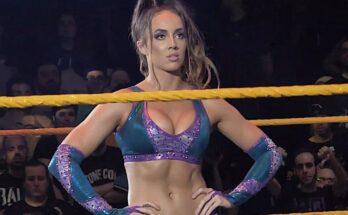