Becky Lynch Looks Absolutely Ripped Ahead Of WWE Return – Becky Lynch’s WWE return is one of the most highly-anticipated moments of the year. She is among multiple big stars who may return, as WWE prepares for the return of live fans this week.

The Man has been pictured multiple times recently, looking in great shape every single time. Lynch was backstage at Hell in a Cell last month, as well as the WWE Performance Center. Reports stated that she looked “jacked” and “like she never left.”

There is visual evidence to them as well. The @Dro Instagram handle, in relation to Deadboys Fitness, recently posted a photo of Becky Lynch working out. She looks in fantastic shape and seems ready for an immediate return to the ring. 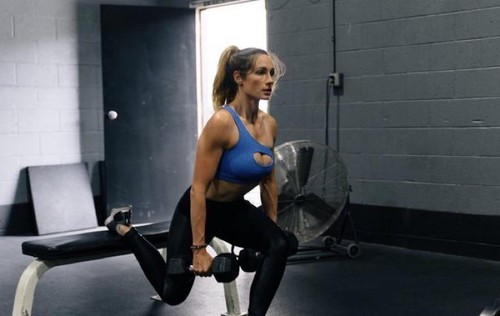 Becky Lynch was last seen in WWE over 14 months ago, when she handed the RAW Women’s Championship to Asuka and announced her pregnancy. She gave birth to her daughter Roux on December 4th, 2020. Since then, fans have been speculating over Lynch’s return to WWE.

The Man cheekily teased a return on social media multiple times since then, including during Royal Rumble and before both nights of WrestleMania 37. However, she did not appear as WWE did not want to jump the gun on her return.

With that being said, Becky Lynch’s return seems imminent now. She has visibly been training very hard following her pregnancy, while WWE needs some marquee names to celebrate the return of live fans. The Man might return as early as the Money in the Bank pay-per-view this Sunday.

But even if she doesn’t, expect Becky Lynch to be back on WWE TV for the build to SummerSlam. Her return would instantly improve the state of RAW’s women’s division.

Becky Lynch Explains Why She Turned Back Into A Babyface