As we’ve noted, Rousey has been traveling the United States to film the new version of the “Peyton’s Place” documentary series for Disney’s ESPN+ platform. The series once focused on football, but is now expanding to tell the stories of other sports with Rousey among the hosts. It was recently revealed that Rousey was in Pennsylvania to film content in Philadelphia, and to film with WWE Hall of Famer Kurt Angle in Pittsburgh. You can click here for a photo of Angle and Rousey together with Rousey’s milk truck.

In an update, Rousey was in Philadelphia to film at the 2300 Arena, formerly known as the legendary ECW Arena, according to PWInsider.

Rousey, Heyman and Dudley were reportedly discussing the extreme history of pro wrestling in the City of Brotherly Love. The filming included a wrestling ring that came from the world famous Monster Factory school, which is located in nearby Paulsboro, NJ, plus a number of weapons that were used as set decorations.

It appears this segment was filmed for the ESPN+ series, but that has not been confirmed. There is no word on why WWE Hall of Famer Bully Ray did not join them, but due to D-Von and Heyman currently being affiliated with WWE, that could be a sign that the company had at least some involvement in the filming. D-Von has been a regular on Rousey’s YouTube channel for the last year or so, while Heyman worked closely with Rousey during her WWE run.

There is no word on when the docuseries will premiere on Disney’s ESPN+ service, but you can see Rousey featured in a recent promo below.

Rousey announced back in April that she was already 4 months pregnant, expecting her first child with husband Travis Browne.

Rousey has been away from WWE since WrestleMania 35 in 2019, but WWE President & Chief Revenue Officer Nick Khan stated in April that she would be returning soon. 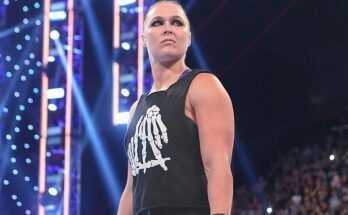