Rhea Ripley appeared on Out of Character with Ryan Satin to discuss her WWE career. Ripley went in depth on her character, which she’s improved on thanks to acting classes and an improvement in confidence.

“Yeah definitely,” Ripley said when asked if taking acting classes helped. “My confidence isn’t huge in my every day life. Like I’m a really shy person, I’m not very confident. I’m not good at keeping a conversation and being a larger than life person.

Overall Ripley considers her character to be an extension of herself when she first started wrestling in her native Australia. It’s all just been about fine tuning it the more experience she gets.

“I think I was more focused on the moves and how I looked physically,” Ripley said, describing the start of her career. “I didn’t really think about the character stuff at all. Even in Australia, I would come out to Of Mice and Men, which was my favorite band at the time, and it was one of their main songs, ‘Second & Sebring.’ I loved it so much I used it as my entrance song. And I’d just go out and I was me.

“I would go out there and be like I would if I was at a concert or music festival, and I’d go out and headbang until I nearly fall over. I started doing that in the first Mae Young Classic as well. But I think, in the last few years of my life, I’ve grown so much as a person outside of wrestling, I’ve also been growing a lot in the ring and in the wrestling business. But it’s still me. It’s just a more evolved version of myself.”

Perhaps the biggest inspiration for the Rhea Ripley everyone sees today are the events that took place in Ripley’s life between the first two Mae Young Classics. According to Ripley, it was a dark period in her life that led to her adopting the attitude now seen every Monday Night.

“I went through something between the first Mae Young Classic and the second Mae Young Classic,” Ripley said. “I was very unhappy with my life, at work and outside of work. My relationship wasn’t going to well outside of work, and at work I felt like I didn’t belong. And also I didn’t get to see my family at all. I was very sad with that, I was homesick. I just, I wasn’t very happy.

“So I think the person you saw in the second Mae Young Classic, that was me after I had pretty much had enough of the world. And I was just like ‘you know what? I can’t care what everyone’s saying about me. I just can’t. I can’t let it get to me, I’ve got to use that against them somehow.’ So it was a lot of home and life drama that made you see the Rhea Ripley you saw in the second Mae Young, and the Rhea Ripley you see today.”

Ripley will defend her RAW Women’s Championship against Charlotte Flair and Asuka in a triple threat match at the WrestleMania Backlash pay-per-view on May 16th. 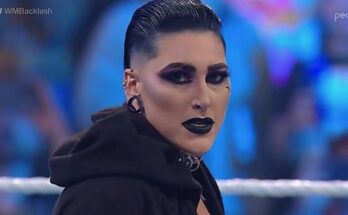