WWE has announced a sell-out crowd of 25,675 fans in attendance for Night 1 of WrestleMania 37 at Raymond James Stadium in Tampa, Florida.

It was previously revealed that WWE expected 25.000 fans each night for WrestleMania 37. They had planned to sell 75,000 tickets, but were forced to reduce the allowed capacity due to COVID-19 protocols. WWE usually boosts the actual attendance number up for their attendance announcement, but there’s no word yet on if that’s where they got the extra 675 fans from.

WrestleMania 37 main broadcast kicked off with WWE Chairman & CEO Vince McMahon on the stage with the rest of the roster. Vince talked about how the Superstars have performed tirelessly for months, but the most important part of the show has been missing until now – the fans, the WWE Universe. Vince went on and said as we emerge from the dreadful pandemic, on behalf of the WWE family, he’d like to thank the fans and welcome them to… WrestleMania! The crowd then popped for Vince and cheered him on as the roster clapped as well.

WrestleMania then went to a cold open and the “America The Beautiful” performance by Bebe Rexha. Michael Cole, Samoa Joe and Byron Saxton then welcomed us to ringside but fans in the building were seen moving around and covering with ponchos as the weather delay from earlier today was resumed. Cole promised the action would begin soon, but they went to various backstage interviews to stall. As of 8:25pm the show still had not started as they are still stalling with interviews and panel segments, but Cole just noted that the action should begin at around 8:30pm ET.

Below is WWE’s full announcement on Night One attendance, along with the opening segments:

TAMPA BAY, Fla. – A sell-out crowd of 25,675 fans attended Night One of WrestleMania at Raymond James Stadium in Tampa Bay, Fla., with millions more watching at home on Peacock in the U.S. and on WWE Network around the world.

Adhering to local health guidelines, a limited number of tickets were sold for WrestleMania, with all in attendance seated in socially-distanced pods. Additional safety measures included health screenings and temperature checks prior to entry into Raymond James Stadium, mask requirements, social distancing, mobile ticketing, cashless concessions and enhanced sanitization throughout the venue. 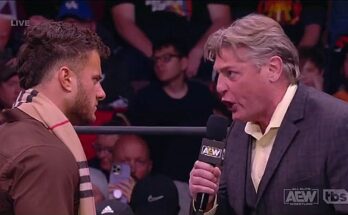