Mace and T-Bar React To Losing Masks – As noted earlier, this week’s RAW episode saw former Retribution members Mace and T-Bar losing their masks after their match against Drew McIntyre and Braun Strowman.

As seen in the post-RAW video below, Sarah Schreiber interviewed Mace and T-BAR about what it means to pick up a win over two former champion.

“What’s it do for us? That does everything for us,” T-BAR declared. “The people want to know who we are, what we’re about, where we’re going, what we’re gonna do… perfect example, what do you think?”

Mace responded, “What does it do for us? We did that… we did that. And as far as I’m concerned, Drew McIntyre, you did me a favor by slapping me across the face with that mask. You revealed to the world exactly what we are – two titans. Two titans that will tower over this entire division, over this entire universe. We did that.”

As noted earlier at this link, it was revealed on Monday that former Retribution members Reckoning (Mia Yim) and Slapjack (Shane Thorne) are headed to the SmackDown brand. There is no word on when they will be debut, and there’s no word on what is planned next for former Retribution leader Mustafa Ali. The group split up a few weeks back with no real pay-off to the angle. 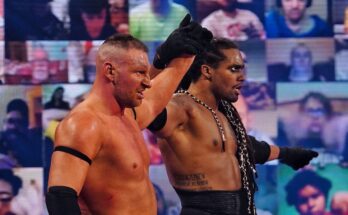