Rhea Ripley is headed to the WWE RAW brand.

There had been speculation on Ripley possibly going to RAW or SmackDown after her official call-up from WWE NXT was considered to be at the Royal Rumble pay-per-view in late January. Now WWE has confirmed that the former NXT Women’s Champion is headed to Monday nights.

As seen below, a “coming soon” vignette for Ripley aired during tonight’s edition of RAW.

Ripley was the #14 entrant in the 30-Woman Rumble Match last month, and was the last elimination, tossed out by winner Bianca Belair. She lasted 39:06 and eliminated Toni Storm, Santana Garrett, Dana Brooke, Dakota Kai, Mandy Rose, Alexa Bliss, and Charlotte Flair, with Belair’s help. Ripley’s last NXT TV match came on January 6 at the New Year’s Evil special, when she lost to Raquel Gonzalez in the Last Woman Standing match.

There is no word yet on when Ripley will make her official RAW debut, but stay tuned as we will keep you updated. Below is the vignette from tonight’s RAW: 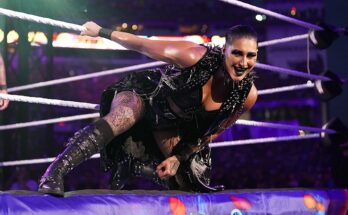