The feud between Karrion Kross and Santos Escobar continued during tonight’s NXT, as Kross won a non-title No DQ match over the leader of Legado del Fantasma.

Per the stipulations set by NXT General Manager William Regal, Escobar would have been stripped of his title and suspended indefinitely if he no-showed the match this week. The brawl started in the back parking lot of the WWE Performance Center, and saw Kross fight Escobar, Raul Mendoza and Joaquin Wilde for most of the match.

After a box truck and a trash can were used as weapons in the parking lot, the brawl came inside where the tripe team continued. The finish saw Kross put Escobar through the announce table with a Doomsday Saito suplex. Kross then brought Escobar back into the ring for another Doomsday Saito. Kross waited in the corner for Escobar to get back up, and then delivered the running forearm to the back of the head to get the pin, in a finish that seemed a bit early.

Kross stood tall with Scarlett after the match, clutching his previously-injured shoulder that Legado del Fantasma focused on during the match. The bout went around 15 minutes in length.

Kross tweeted after the win and posted a GIF of an inferno.

“In the end, everybody pays the toll. #FallAndPray,” he wrote with the GIF.

Escobar also tweeted after the loss and said he always comes back.

“Nothing I enjoy more than a good fight… I will ALWAYS come back… #ILeadYouFollow [fist emoji] [skull and crossbones emoji] [Mexico flag emoji],” Escobar wrote.

Escobar also responded to Sam Roberts, who tweeted that he was a big fan of the Legado del Fantasma leader.

There’s no word on what WWE has planned for the Kross vs. Escobar feud, if anything, but we will keep you updated.

Below is video from tonight’s No DQ match, along with the tweets from Kross and Escobar:

Nothing I enjoy more than a good fight… I will ALWAYS come back… #ILeadYouFollow 👊🏽☠️🇲🇽 pic.twitter.com/DSvbZTEK5m 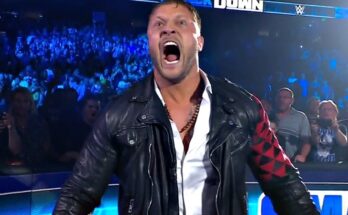