She wrote, “Idk what’s better….the win, the money, the suite, or pissing off the queen.?? Thank you Daddy @ricflairnatureboy #WorkSmarterNotHarder #RAW.”

The Nature Boy got involved in the match when Charlotte covered Lacey for the three count after hitting the Natural Selection. Flair put Lacey’s leg on the bottom rope and alerted the referee. Thereafter, when Charlotte tried to suplex Lacey in from the apron, Flair held his daughter’s leg, helping Lacey to fall on top of Charlotte for the pin fall victory.

During last week’s RAW Legends Night, Ric Flair inadvertently helped Lacey and Peyton Royce beat WWE Women’s Tag Team Champions Charlotte and Asuka in a tag team bout. After that match, Charlotte stared her dad down, getting in his face and telling him to stay out of her business. The tension spilled over to RAW Talk when Charlotte asked her father to leave the set and to stop following her. 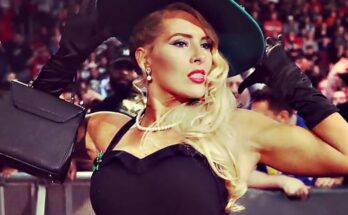