The promotion tweeted, “@AEW World Champion @KennyOmegamanX and The Good Brothers w/@TheDonCallis will appear on IMPACT NEXT TUESDAY at 8/7c on @AXSTV! #IMPACTonAXSTV”

As noted, Omega, Gallows, and Anderson are teaming up to go against Rich Swann and Motor City Machine Guns at the Hard To Kill pay-per-view.

— Sting took to Twitter today and responded to praise from another WWE Hall of Famer – Bret Hart.

The Stinger was responding to comments The Hitman made during a 2016 episode of his Sharpshooter Show podcast, which were tweeted by a fan this past week.

Hart said at the time, “Sting was a class guy, just a first-rate guy. Great guy to work with. A real friend. Never saw any ounce of ego. Just a team player all the way and I always had a lot of respect for him. He really made coming to work fun.”

Sting responded just this week and said the feeling is mutual.

“The feeling is mutual, @BretHart. Enjoyed working with you. Great finisher! My one regret is I never got to see a Stinger cartoon from you,” he wrote, joking about the Sharpshooter vs. the Scorpion Death Lock.

Sting and Hart wrestled against each other and teamed up several times in WCW during the late 1990s. Their last TV match came on November 21, 1999 at the WCW Mayhem pay-per-view. That match saw Hart defeat Sting by submission, to advance to the finals of the tournament for the vacant WCW World Heavyweight Title. Hart later won the main event that night for the title, by defeating Chris Benoit. Hart would go on to retain the World Heavyweight Title over Sting at two WCW live events – December 3 and December 4, 1999. That was the last time they shared a ring. 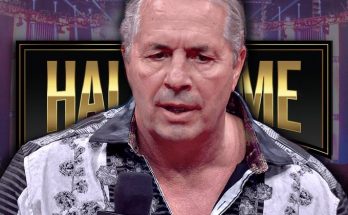