Baker tweeted about how she still doesn’t have an action figure of herself. AEW has announced their first 3 sets of figures from Wicked Cool Toys, and Baker still has not received a figure. The women’s wrestlers included in AEW’s first three releases are Brandi Rhodes and Riho.

“Imagine being the face of a division, the first woman signed, a role model, Michael Jordan, the baddest b—h on the block, a dentist…. and STILL not have an action figure. [pouting face emoji] @AEW,” Baker tweeted.

Blayze wrote back and claimed Baker was just handed her position. She also pointed to how it took 20 years to get her own figure, and apparently knocked Baker over respect.

“Well let’s see…I believe you just learned how to tie your boots, & got handed your position… it is almost 2021 and women’s Wrestling is fast tracking I’m sure you will have one soon.However it took me 20+ years before I received mine. Some people just earn respect differently,” she wrote back to Baker.

Baker has not responded to Blayze as of this writing. Some fans are speculating that they could be working a Twitter angle together or something like that, but there’s been nothing to support that theory.

You can see their full tweets below, along with tweets from Brian Myers and Renee Paquette (Renee Young) in response to Baker’s original tweet about not having her own action figure: 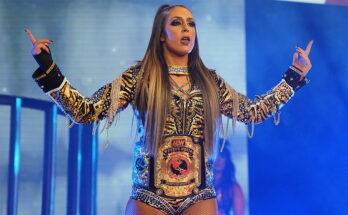