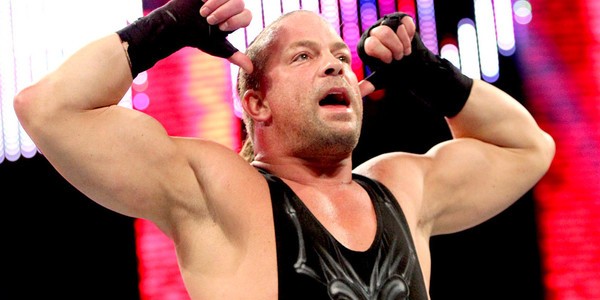 RVD signed a new deal with Impact a year ago and has enjoyed his time on Impact so far. He said on the podcast that he’ll go wherever life takes him, referencing an audio book he has been reading about not caring too much about every little thing.

“Not thinking about changing spaces and I have no idea if I’m going to be with them for a while,” RVD admitted. “I don’t look that far ahead, so I can say for the foreseeable future, that I’ll be with them. I don’t have any plans of leaving. Having said that, if the relationship ends, then I also won’t be like shot. It always throws me for a loop when they’re surprised that people you let go or fired. ‘Oh my God, I can’t believe so and so.’ I’m like, I believe it. I’ve been the business 30 years. It happens, although I’ve never gotten fired in my life, but I am one of if not the most expensive guy in the dressing room. When they use me, they don’t even have me and Katie [Forbes] on the entrance. She noticed on the intro.

“So when I watch stuff like that, it’s like, I don’t know some of these decisions. I don’t know if they are trying to get a rub off me and and then handle on their own or whatever, but I’m easygoing with whatever their plans are. So the good thing about all that is not really having any emotional investment in too much. In other words not giving a bleep. There’s a book I recommend ‘The Simple Art of Not Giving a Bleep.’ I recommend it. It’s an audio book on YouTube too, and I listen to it. I’m like dude, this is such a good way to explain to people like quit stressing out. You have so many f’s you can give. You got to be choosy about where you give them. Don’t care about everything.”

“I got so many coming out dude. So many still coming out soon too,” RVD teased. “Well, so advertised in the last week or two has been my video game deal with Virtual Basement. I’ll be on their their next video game. Gamers are excited. EGames, I have my own EGames team. We’re going to be doing a tournament and things of the nature in EGames. SRT is a card game for the guys that play the wrestling card game. I have had my own team that I’m sponsoring. We got huge plans with tournaments, and we have some merchandise things and we have some stuff that I got to wait a few days to tell you, but yeah, that’s basically what I’m going to do is come up with a whole bunch of stuff all connected to my enterprise and hopefully be able to entertain some people while they’re stuck at home.

“Celebrity Slot’s is the first of this kind where people can win prizes. The phone apps that I have so far like Cameo, this is way different and cooler and so far the most interactive with the fans. How it came across me was actually from an agent of mine in Los Angeles. He emailed me said, ‘hey, I got this guy that’s got this thing. It’s cool. I think you might like it. Do you want to talk to him?’ That’s how it was, and then I heard now just because RVD is doing it, Ric Flair’s got to do it. Everyone’s trying to be Rob Van Dam now.”

Video Of Antonio Inoki’s Final Words Before His Death