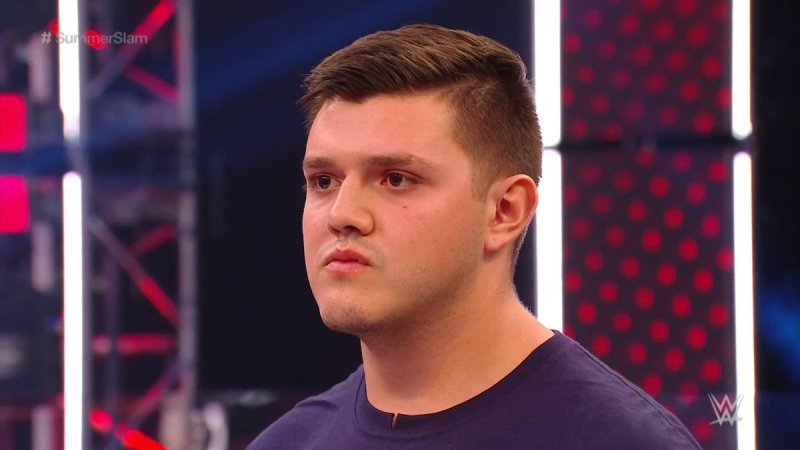 Dominik Mysterio has been heavily featured on RAW for some time now, but he finally had his debut match against Seth Rollins at WWE SummerSlam.

The street fight was an excellent showing for Mysterio, and the story had all the makings and support needed to deliver for the audience watching along.

Dominik recently joined Talk Sport and discussed if there was any added pressure after McAfee’s incredible performance.

“It’s funny you mention that,” Dominik said, speaking of the pressure. “I flew into Orlando on Saturday mid-day and was able to catch NXT TakeOver XXX, and was able to catch Pat’s match. He absolutely killed it! With the backflip to the jump, to the superplex, to the swanton to the outside. Yeah, I definitely felt the pressure, the pressure from him killing it at NXT. The pressure from having to wrestle Seth at SummerSlam and having to put on a SummerSlam caliber match. The fact that I have the Mysterio name on my back and trying to make my dad proud, but I was focused on the task at hand and knew what had to be done.

“The reaction backstage was crazy,” Dominik continued. “I got very emotional. I hugged my mom, hugged my dad, hugged Jamie and Seth. Everyone was very happy and clapping for me. It was a very surreal moment. I definitely gave the boss [Vince] a hug and thanked him for the opportunity. It was just a crazy experience. I’m forever grateful.”

Mysterio then revealed that he believes Vince is responsible for him being brought into the storyline with Rollins to begin with. His father, Rey Mysterio Jr., was working in WWE without a contract for quite some time. It has been reported that a big determining factor was Dominik’s future in the business, and WWE ultimately was ready to put him in that spotlight.

“We’ve definitely gotten some of [Vince’s] feedback,” Dominik said. “At the end of the day, I don’t know what people think, but I wasn’t asking for things or begging my dad. I think me being brought into this storyline was definitely coming from someone that has a lot of power, and my guess is that would be Vince. I’m very grateful.”

Potential Plans For Edge Vs Rey Mysterio On Tonight’s RAW