Paul Heyman took to Twitter after the show and hyped up his newest client.

Reigns came out during the match right after The Fiend and Strowman made the ring implode. The ring collapse led to referee Charles Robinson flying out of the ring to the floor, which later forced Reigns to wait for another referee to show up before he could make a pin attempt.

As seen belowe, WWE released post-show backstage footage of Robinson with WWE referee John Cone. The camera man asked Robinson how he can describe what happened with the implosion.

“I don’t even know what happened,” Robinson said. “All of a sudden the ring fell and I was out? Did Roman come out?”

Cone replied, “Roman, yeah he came out. He did.”

Cone then wrapped the interview and asked, “Can we get him some help please? We don’t have time for this.” 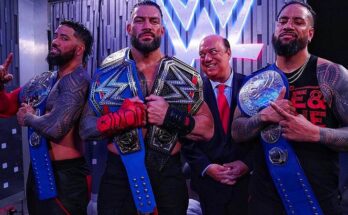